All across America, the media landscape is changing at a furious pace.

Traditional news operations, particularly those that publish print newspapers, have had to adapt to new ways in which “readers” consume information. As a result, traditional newsrooms have shrunk as they experience circulation drops and falling revenues.

In response to these changes, a variety of new types of media have been springing up in some surprising places. Many of these are housed in America’s urban centers. Some of the most successful, however, have arrived in small to mid-sized cities. These include operations that are not tied to so-called “legacy” products (existing newspapers or television stations) but instead are independent and exclusively online.

Almost all of these new sites are still repeating the approach of traditional newspapers – exclusively publishing their own material via old methods and then competing against others who do the same. It’s basically the same old approach in new packaging.

That makes little sense for modern news consumers, who have access to a wide variety of sources, literally at their fingertips. It’s hard to stay on top of it all. Social media like Facebook attempt to bring these sources together, however if a news feed is not accessed during the time a particular post makes its way down the page, a story can easily be missed. Independently checking each and every news site — the Delaware Gazette, ThisWeek News, WDLR, even the Columbus Dispatch and the city’s television stations — can be a time-consuming task. Add to the number of area residents on Twitter, and Instagram, and Pinterest, and Snapchat, and other sites and… well, you get the picture.

One innovative model has recently emerged which combines independent original reporting, curated news, social media posts, and more. This approach was first attempted in a small to mid-sized community through another Total|Local Media site, 1812Blockhouse, in Mansfield and Richland County. 1812Blockhouse launched in September of 2016.

We are now bringing that energy and creativity to central Ohio through the very site you are looking at.

And, like 1812Blockhouse, we are using a significant year for the communities we serve in the site name. Both the city of Delaware and Delaware County were established in the year 1808.

We are one-of-a-kind, mobile-focused, social media-driven, passionately pro local, and ready to roll. Thank you for reading this, and we invite you to visit often.

1808Delaware is a member site of LION Publishers, the country’s only association of local independent online news publishers, who are creating the future of local news with sites that directly serve their communities.

A bit about Thomas.

1808Delaware’s founder, owner, and publisher Thomas Palmer has been involved with the creation and operation of online local news sites for over ten years.

Thomas’ work began in his hometown of Galion in north central Ohio with the creation of GalionLive, one of the very first “hyperlocal” news sites in the Midwest and one of the first two in Ohio. GalionLive developed a strong based of readers and became an important part of civic life in that community.

In that period, GalionLive joined with other independent online news sites across the country to share ideas and suggestions. The site was included in the first generation of surveys in the field undertaken by the University of Missouri and New York University Journalism Schools. It also became a part of “Authentically Local,” an initiative that helped bring together a group that went on to create the current LION (Local Independent Online News) Publishers, and was eventually sold at a profit to an independent, online-focused news operation. 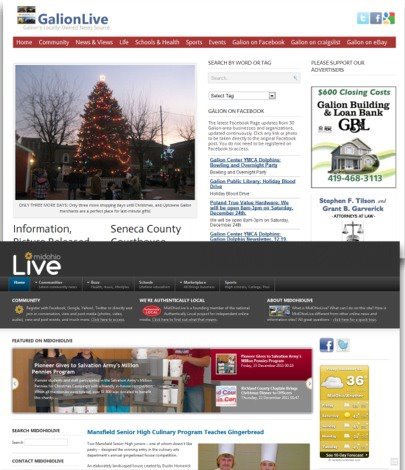 In September, 2016, 1812Blockhouse joined the mix of local media as a new and unique voice in a county which also has a TV news operation, a Gannett daily news operation, a local independent online news site, radio newsrooms, and two weekly publications. From the outset, 1812Blockhouse has been the sole news operation to limit its coverage to Richland County and to link to the best writing from the area, thus becoming the ideal one-stop location for local news and information.

In 2019, the two sites were group together under the Total|Local Media moniker.

Thomas has spoken at several conferences and at schools of journalism and communication. In addition to media work, Thomas is a licensed attorney, a public official, the Executive Director of a statewide non-profit organization, and a church musician. Thomas is a graduate of the University of Utah and The Ohio State University, where he was a member of the renowned Ohio State University Marching Band. He has two children, Judson and Caroline.

Thomas also has a Delaware connection – he served as the first-ever Downtown Coordinator for Downtown Delaware, Inc., and was responsible for holding the first Main Street program meeting in Delaware history, a move which led to Main Street Delaware.

You can follow Thomas through the following social media accounts. Please feel free to contact him at any time — he absolutely loves to talk local media!