The hearing room served as the iconic building’s first courtroom from 1869 to 2017. Shaw presided over it from 1976 to 2003, and his 27 years on the bench made him Delaware County’s longest-serving General Division Common Pleas Court judge. But the honor derives just as much from Shaw’s devotion to preserving local history, the Commissioners noted in the ceremony, which they listed on their regular Thursday session agenda simply as an award-recognition event for the Historic Courthouse’s renovation that was completed in January. 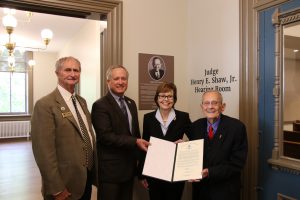 “Henry was a driving force in making sure we preserved this majestic building and upgraded our Veterans Memorial out front,” said Commissioner Gary Merrell on behalf of himself and his fellow Commissioners Jeff Benton and Barb Lewis. “He has been a central figure in Delaware County all of his career and it only makes sense that we should name this hearing room, which is so central to the operations of the county, in his honor.”

The ceremony was attended by a bevy of local attorneys, current and former county officials, including Ohio Attorney General David Yost, who began his legal career in the former courtroom. Many of Judge Shaw’s former staff members also attended and aided in surprising their former boss.

“Judge Shaw, a fitting recognition of your long service,” said Yost. “I am grateful for the experiences I had, learning how to practice law under your direct and tough tutelage. Congratulations, sir.”

Shaw regaled the gathering with stories of training his Great Danes in the room on weekends and evenings when he had the run of the place. He also noted how much he enjoyed his career.

“It was fun,” he emphasized. “Coming to work here, every day, it was fun.”

The proclamation read in Shaw’s honor noted his involvement with numerous historical organizations, including the Delaware County and Ohio Historical Societies, the National Trust for Historical Preservation and the Sons of the American Revolution. He has also been a devoted member of Battery I of the 1st Ohio Light Artillery, which participates in Civil War reenactments. His avocations also extend to carpentry, firearm collecting, and English choral and organ music of the Baroque era.

Aviation Has Banner Year In Columbus During 2022

Aviation Has Banner Year In Columbus During 2022

Coffee Lovers Unite: You Now Have Your Own Trail

Delaware County News From Other Media