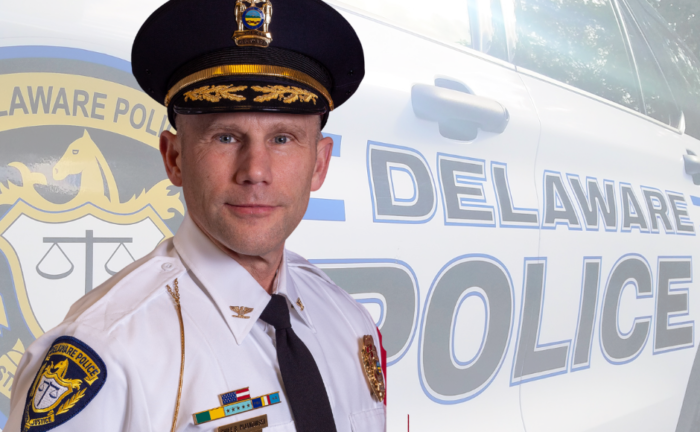 Chief Of Police Retiring After 34 Years With Department

On Wednesday, City of Delaware Chief of Police Bruce Pijanowski announced that he will be retiring from the department he has served for 34 years to take a new position as the assistant superintendent of the state of Ohio Bureau of Criminal Investigation.

Chief Pijanowski’s last day with the Delaware Police Department will be May 20.

“For more than 30 years, this department has been my home, every day a new challenge,” Pijanowski said. “As a police officer you get to make a difference every day; Nothing beats that kind of satisfaction, but I’m looking forward to the next chapter.”

Pijanowski, 56, has been chief of police since 2012 and with the Delaware police department since April 1988. The chief has served as a patrol officer, sergeant, detective sergeant, captain, assistant chief and interim chief – all in Delaware.

“Bruce has dedicated his life to Delaware public service and public safety, and the department he runs today is recognized as one of the best anywhere,” City Manager Tom Homan said. “His commitment to the department and our community is unmatched.”

Pijanowski is a graduate of Bowling Green State University, the FBI National Academy, the Police Executive Leadership College, and since 2016 has served on the executive committee of the Ohio Association of Chiefs of Police.

Homan will appoint an interim chief and a search will begin for the next chief to lead the department of approximately 55 sworn officers and a budget of nearly $12 million.

“Chief Pijanowski brings a passion for law enforcement that will help us continue to raise the level of work being done at BCI – which is already among the best in the nation,” Ohio Attorney Dave Yost said. “He understands that BCI’s job is to help local law enforcement, and his background as a hands-on chief gives him front-row perspective into what’s needed on the streets of Ohio.”