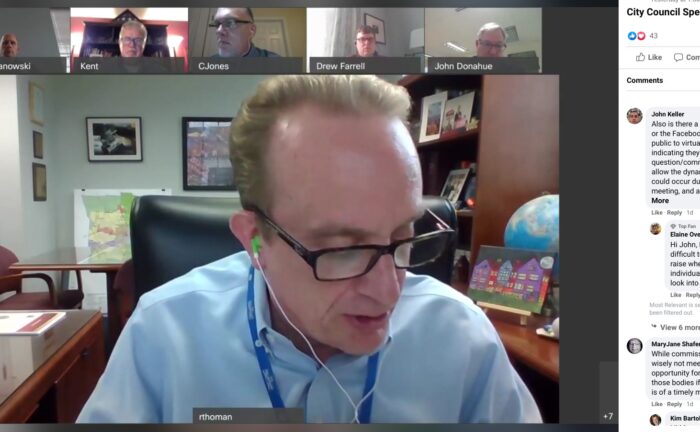 Such was the case in Delaware on Wednesday night, as Delaware City Council held what might well have been the first entirely virtual meeting of a city council in Ohio history.

Ohio’s Sunshine Laws have guaranteed since their adoption that meetings of local governmental bodies take place in open meetings that the public may attend and observe. These laws were adopted before technological advances that allow for remote livestreaming, however, and certainly before the recent pandemic impacted how Ohio cities, villages, counties, school boards, and other public bodies conduct business.

This past Friday, Ohio Attorney General Dave Yost issued a letter which addressed concerns relating to holding open meetings in the light of public health advisories dealing with meeting size and social distancing. More than one Ohio city has since been measuring city council meeting rooms to determine how to meet those requirements.

The letter, which does not have the legal impact of an official opinion, nevertheless does state that in Yost’s opinion can be considered “open” if livestreamed, with certain conditions met. Also, individual members who are not present could participate if other conditions are met if the public can hear and observe all deliberations.

“If a public body gives the public access to a meeting electronically and the members of the body appear telephonically, the body must still ensure that the public is able to hear the discussions and deliberations of all of the members, even those who are present via telephonic means,” Yost said.

Since Friday, many of Ohio’s local public bodies have taken this approach, particularly as to limiting access to social media livestreaming, often via Facebook.

Delaware City Council took this one step further, as Wednesday’s Council meeting was held entirely online. Using CISCO Webex, each Council member’s face was shown on the main screen during times in which they spoke, while at other times they were in small vignette-sized images on the perimeter.

Perhaps fittingly, the sole item on Council’s agenda was consideration of an ordinance “…authorizing emergency measures in response to COVID-19 virus…” That measure included authorization for remote meetings, transferring powers of city boards and commissions to the City Manager and Council during times when public health restrictions on meetings are in place, and giving the City Manager power to delcare a local emergency.

The legislation passed easily. Some comments on Facebook questioned the inability of citizens to ask questions during the meeting, but others noted that the times justified use of the technology.

You can view the City Council meeting at this location.