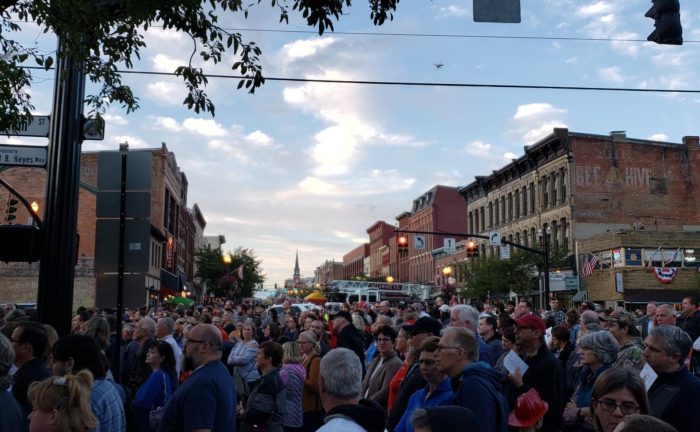 Perhaps it was the cooler weather, or maybe it was the scene of fire engines and equipment lining two blocks of Sandusky Street. Or, just as likely, it was the opportunity to watch history take place before one’s own eyes. Whatever the reason, a very large crowd filled downtown Delaware on Friday night for the October First Friday.

The event was marked by the official unveiling of a new statue of native son President Rutherford B. Hayes, one which, speakers noted often, looks in the direction of the site of his birthplace on East William Street. Fittingly, it took place on Hayes’ 197th birthday.

Hundreds and hundreds of onlookers sought the best position to view the ceremony and, at its conclusion, the removal of a covering over the standing image of the country’s 19th President.

During the unveiling, the music played was “Fanfare for the 19th President,” composed by Judge David Hejmanowski.

Back to the fire engines. Children up and down Sandusky Street were enjoying roasting s’mores with members of the Delaware Fire Department, practicing using water hoses, and enjoying great food with their parents.

Several photos from the evening are below; click any for a larger image.