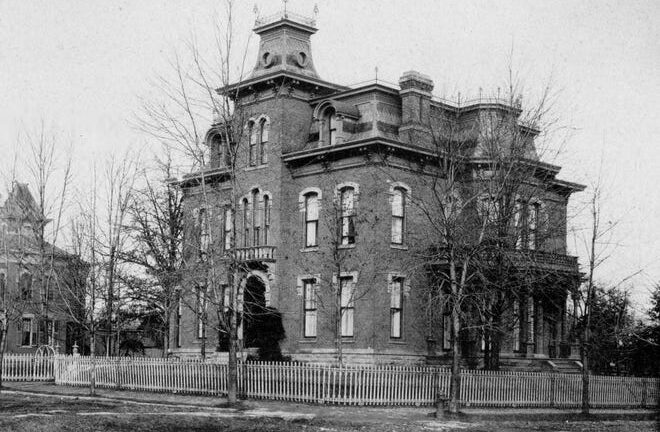 Historic Landmark In Delaware Coming Up For Sheriff’s Sale

A key historic resource in Delaware’s traditional Northwest Neighborhood is coming up for sale later this month.

The former Sunny Vee Nursing Home at 54 W. Lincoln Ave. will be part of the Delaware County Auditor’s Forfeited Land Sale on Tuesday, March 15, at 10 AM. The auction will take place in the first-floor lobby of the Hayes Administration Building at 145 N. Union St. in Delaware.

This sprawling, three-story Italianate structure dates from the 1870s when it was built as a private home by Velorus Todd Hills, manager of a wholesale grocery company. It sits across the street from Asbury United Methodist Church and in the midst of a neighborhood populated with large, nineteenth century single-family homes.

In 1915, the building became home to an Ohio Wesleyan University fraternity, as several large residences in Delaware once were before the university built on-campus fraternity houses. From 1963 until 2008, the building served as a nursing home under two different owners. It has been vacant for the last 13 years and has accrued more than $150,000 in unpaid property taxes.

The forfeited land sale, which will be conducted by County Auditor George Kaitsa, is the first step in the returning the property to usefulness. A starting minimum bid for the full cost of outstanding charges on the property will be sought, but if none are received, Kaitsa is then able to drop the minimum-bid threshold until an offer is received.

“This is a rare opportunity for someone to acquire a unique property in a historic part of the city of Delaware,” said Kaitsa. “And it will be sold to the highest bidder without regard to any of the back taxes or assessments that are owed on the property.”

County Commissioner Jeff Benton is a member of the county’s Land Bank board of directors, which has been a driving force behind pushing this property — and many others — back into productive use in the private sector. Benton said a property could conceivably be bought for as little as $1, though a $45 deed fee and a $42 recording fee also must be paid by the winning bidder. If the winning bid exceeds $500, then the winner must be able to pay at least $500 on March 15 with cash, a certified check or a money order. The balance of payment is then due within 30 days.

For more information about the forfeited land sale and the properties being offered on March 15, go to: https://auditor.co.delaware.oh.us/forfeited-land-sales/. Prospective buyers also can contact Delaware County Chief Deputy Auditor Michael Ringle at mringle@co.delaware.oh.us or 740-833-2939.

1808Delaware will be doing a special “Landmark of Delaware County” post in the coming days to commemorate this sale.