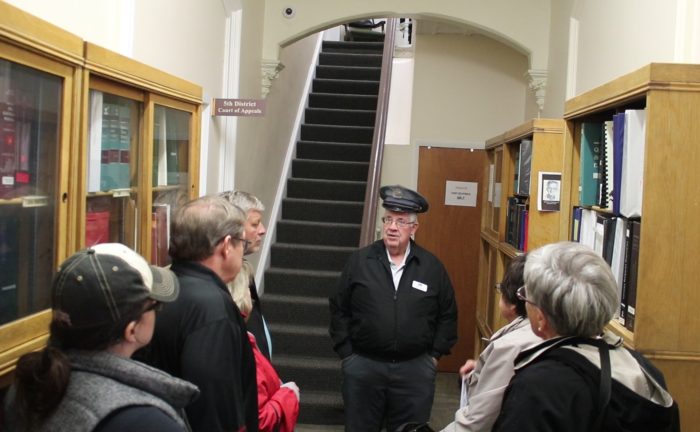 On Saturday, October 26, the Delaware County Historical Society held its 3rd annual guided tour of the old Delaware County Jail and Sheriff’s Residence in Delaware, located at 20 W. Central Ave. Despite the rain, over 100 people gathered to learn about the history of this iconic historic jail, which housed prisoners from 1878 to 1988. Historical Society volunteers, Brent Carson and Dave Hejmanowski, conducted the tour, and invited visitors to walk through the building, including the cellblocks.

The Victorian Gothic-style building, designed by Toledo architect David Gibbs, was constructed in 1878. During the next 100 years, about 40 county sheriffs and their families lived there.

In the early years of Sheriff Wornstaff’s tenure (1957-1964), the number of prisoners ranged from four to eight; the jail was intended to accommodate up to 16 prisoners. By the 1980s, the jail was housing up to 45 double-bunked prisoners. When the jail became overcrowded, inmates slept on mattresses on the floor wherever they fit. The bullpen, or commons area of the cellblock, had a table that seated 16; others ate in their cells. Cells were typically not locked unless there was a security risk or for the well-being of the individual.

Sheriff William B. Lavery, who was sheriff from 1977-1992, was the last to operate a jail in the historic building. The last sheriff to live in the building was Eugene Jackson, who served from 1965 to 1976. To accommodate the increasing number of prisoners, the county built a new jail on U.S. 42 in 1988.

The county announced in February 2018 that they were putting the building up for sale. The county law library will move to the old courthouse once that that building has been renovated.

The Delaware County Historical Society is a non-profit organization whose mission is to promote, preserve and sustain interest in the history of Delaware County. The Barn at Stratford is operated by DCHS as an event venue for weddings, corporate meetings and other special occasions. To learn more, visit the venue and society web sites at barnatstratford.org and delawareohiohistory.org.