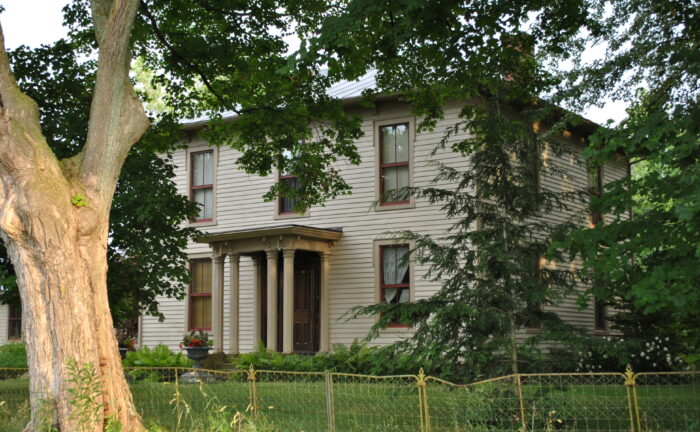 The house on Gorsuch Road is very much part of Delaware County history, as the location on which it sits has a 210 year-plus history.

The John Cook House was the home of John and Helen Tompkins Cook; John was a farmer who also dabbled in raising livestock. When he constructed the house in 1863, doing much of the carpentry himself, he was doing so on land owned by his family since the first decade of the 19th century.

John’s parents, Benajah and Cassandra Cook, came to Ohio after buying 4,000 acres of farmland for the princely sum of $1,700 (something tells us Harlem Township land goes for a bit more today). They were the first settlers from the east to settle here.

John was the eleventh of twelve children. He and his wife Helen would raise six children in this house. As the acreage had been divided at the time of Benajah’s death in 1839, John ended up with 573 acres of land.

It was said that John Cook was an excellent engineer. He did receive a patent for a windmill in 1875, and worked a water sawmill on the property where the first lumber in the township was sawed.

The John Cook House was built on a stone foundation. It is nearly square in shape, with double hung windows featuring simple molding, a hallmark of 1860s vernacular architecture. There is an attached one story extension which was built at the same time; this was used as an “apartment” where newly married children could lie before getting a house of their own.

The house’s roofline has a wide frieze, carved brackets, and an overhanging cornice. The roof originally featured a deck. There are two interior chimneys.

The John Cook House was placed on the National Register of Historic Places in 1977. It is still owned by descendants of the Cook family.