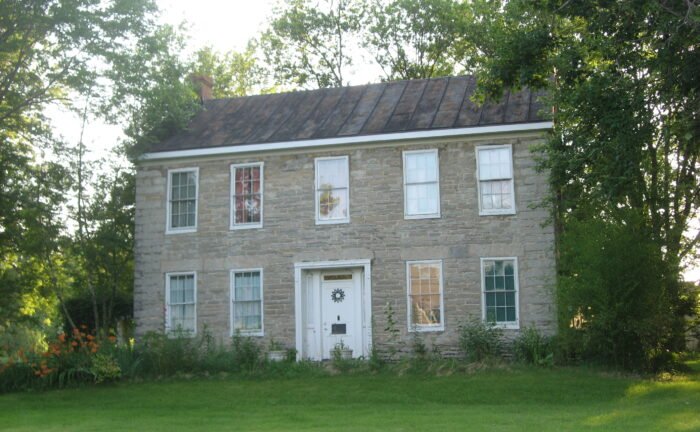 The unique barn is one of four that survive along the Olentangy dating from before 1860. It is the only one of those to be paired with a stone farmhouse.

Farmer Daniel Stout was born about 1817 in Berks County, Pennsylvania. He and his wife, registered in 19th century census records as “Mary” but also known as Moliie May, raised three children in the house — Sarah, George A., and Amos. Mollie was originally from Fairfield County, suggesting that the couple met and married in Ohio.

Once the house and barn were built, Daniel and Mary lived there until their deaths — Mary in 1899, and Daniel in 1905. Both are buried in Delaware’s Oak Grove Cemetery. Stout family descendants lived on the property until 1972.

Limestone Vale has features which suggest a southeastern Pennsylvania influence. It has quions (masonry blocks the corner of a wall), a recessed entrance, and a denitled cornice.

The property was placed on the National Register of Historic Places on October 2, 1978.

UPDATE AND CORRECTION — A reader wrote 1808Delaware to inform us that unfortunately the stone end barn no longer survives on the property. Many thanks to this reader and all who share updates and corrections.