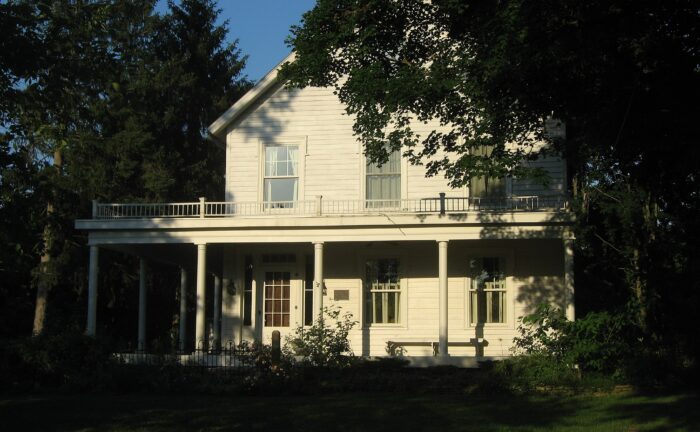 The life of Norman Dewey Perry was anything but conventional.

We know this chiefly because of a lengthy autobiography he wrote near the end of his life. Another hint at his life is this quote from his obituary, ““While Norman Dewey Perry did not register success, as some men measure it, by the accumulation of great wealth, he builded for himself an honorable character and all through his life drew to himself the respect, confidence and good will of his fellowmen.”

Norman, a close relative of famed naval hero Commodore Oliver Hazard Perry, was born in Connecticut in 1813. His youth was spent there, after which he began a series of moves that resulted in his introduction into the milling and paper production industry – first in Canada, then Michigan, West Virginia, Zanesville, and in July 1839 accepting a position near Delaware where a new mill was being constructed.

From that time on, Perry became affiliated with and eventually operated and owned a mill in the Stratford area, at one point partnering with noted Delaware businessman Hiram G. Andrews.

The mills with which Perry was associated met with fortune and tragedy. One burned to the ground in 1857; in the 1860s, his mill ended up with a contract for printing paper for the State of Ohio. In 1870, reports indicate that the Andrews and Perry mill employed 25 males and 12 females.

By 1875, however, the mill was sold and Perry and family moved south to Columbus, where he operated a grocery. While he would travel a great deal in his later years, particularly in the western part of the country, he is buried in Columbus’ Greenlawn Cemetery.

Perry was married twice and had a total of ten children.

In 1862, during his Delaware County years when his mill was still growing and the future looked bright, Perry built his house at what is now 2367 Stratford Road. The house is a pleasant, two and a half story frame structure with a wide front door surrounded by a transom and fanlights and a one story rear extension. The exterior trim is restrained with narrow, decorative hoodmolds. A wide porch extends across the front and left side of the house.

While it was built by someone in management and ownership interests, this was not a pretentious house. Fortunately, it has been meticulously preserved. This photo essay (link is here; this was still accessible at the time of posting, but as the property has sold, there is no guarantee that it will remain so) which includes over 100 images of the house’s exterior and interior.

The Norman Dewey Perry House was listed on the National Register of Historic Places on October 3, 1991.