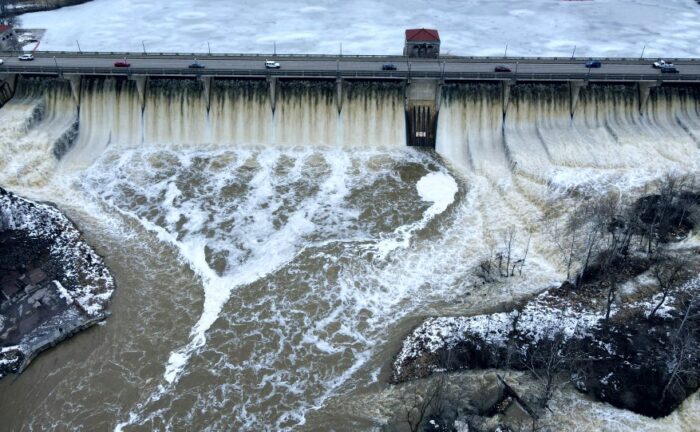 Not all landmarks have four walls and a roof. We have already included an organ and football stadium among our Landmarks of Delaware County, and today we’re featuring another very different kind of landmark.

The O’Shaughnessy Dam spans the Scioto River not far from Dublin, and its presence created O’Shaughnessy Reservoir. The remarkable piece of civil engineering is nearing its 100th birthday.

When the City of Columbus set out to obtain a better supply of drinking water, the Scioto was a natural g0-to. There was an original storage dam completed in 1908, about ten miles downriver from the current location. In the early 1920s, the decision was made to move a dam north and into Delaware County.

The structure was completed in 1925. The project was of such a scope that a contractor was hired that had experience building metropolitan skyscrapers; the Thompson-Starrett Company was responsible for such structures as the General Motors Building in Detroit and the landmark Woolworth Building in New York City.

The word went out for laborers, hundreds of which were needed. Advertisements promoted wages of 40 and 50 cents per hour for a 10 hour day. “Excellent commissary accommodations” were available onsite for a mere $7 a week. There was at least one fatality during construction, which occurred in November 1924.

The dam was named for Superintendent Jerry O’Shaughnessy. It is 1.505 feet long, of which 879 feet is encompassed by the concrete spillway. Total cost was $2.3 million, with the dam taking up $1.54 million of that amount.

The new reservoir was 912 acres in size, with 18.4 miles of shoreline. Near the dam, the reservoir has a depth of 40 feet, although in most of the rest of the area it has half that depth. Its capacity is a staggering 6.3 billion gallons of water. The reservoir watershed is about 770 square miles.

The City of Columbus installed a hydroelectric operation on the west side of the dam in 1987, which is now being repaired for a hopeful reopening in 2023.

The O’Shaughnessy Dam was placed on the National Register of Historic Places in 1990. Interestingly, it is not the only dam in the United States with that name – the other is a massive 117 billion capacity affair that supplies drinking water to metro San Francisco, California.