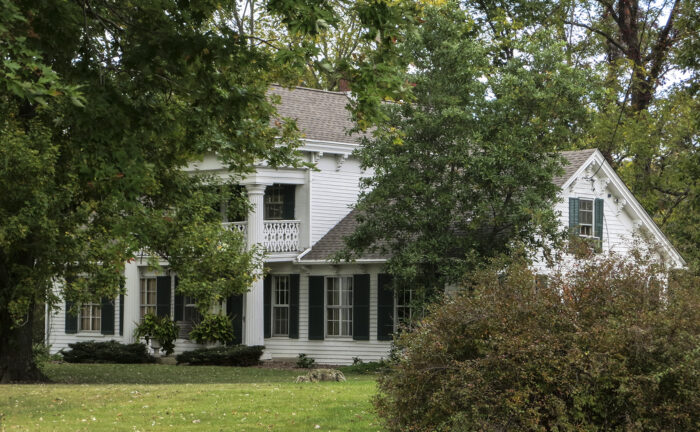 A bit of the old south may yet survive in, of all places, the northern reaches of Delaware County.

The beautiful Samuel Sharp House at 7436 Horseshoe Road, west of Ashley, is uniquely connected to the American Civil War. It was constructed about 1867 by Samuel and Lorinda Sharp, who had married 13 years earlier.

Samuel Sharp was the son of the well-known William Sharp, known locally as the “greatest bee-hunter” in Marlboro (then Marlborough) Township. The Sharps had several children whose given names, with the exception of one child, all began with the letter “L” — Laura, Landon, Lettie, Leslie, Lawrence, and…. Mary.

Sharp served a Captain in Company D of the 121st Ohio Volunteer Infantry, a unit raised in 1862 and mustered in at Camp Delaware. The men for the regiment came from Delaware, Union, Knox, Logan, Marion, and Morrow Counties.

The 121st served primarily in the southern theatre of the war, and in the states of Tennessee and Georgia. It saw action at the Battle of Chickamauga and the Siege of Chattanooga, and lost a total of 349 men during its service, including 9 officers and 92 enlisted men killed or mortally wounded, and 246 men who died of disease.

Three years after resigning his position in 1864, the Sharps began building this house which has strong suggestions of Southern architecture with its central pavilion with one story flanking wings, and its fanlight entrance. The frame house is basically Greek Revival in style and is fronted by a beautiful two story portico with full pediment.

The Samuel Sharp House was placed on the National Register of Historic Places on July 29, 1982.