We continue our ongoing look at the historic resources of Delaware County with a stop in the Northwest Neighborhood, home of an extraordinary collection of nineteenth and early twentieth century residences and churches.

Today, we look at a house which might best be known as the childhood home of a prolific and prominent architect.

The house at 123 North Franklin Street is a magnificent Queen Anne style structure. It was built by prominent local merchant Edward Erford Neff, who was born in 1830 in Dover, Ohio. Neff was married to Mary Ann Glover in 1862, and the couple went on to have three children — John, Addella, and Clarence. 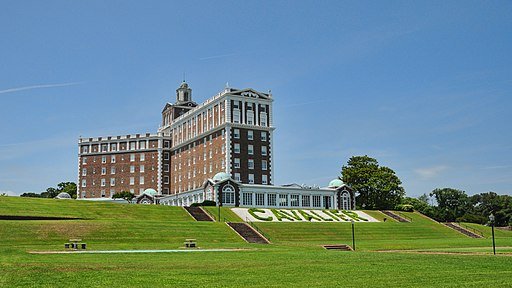 At various points, Edward Neff was a banker, merchant, real estate agent, and also served for a time as Delaware County Treasurer. He died at the home of his daughter in Oregon in 1908.

Clarence Amos Neff, son of Edward and Mary Ann, studied at Ohio Wesleyan and then at Columbia University. It was at the latter institution when he began his study of architecture. He lived in Paris for a year, and may have studied at the famed Ecole dex Beaux-Arts.

In 1898, Clarence moved to Norfolk, Virginia, and soon became the principal of the city’s leading architectural firm. Active from 1902 to 1930, the firm would go on to design 60 projects including theatres, residences, country clubs, large commercial projects, and office buildings.

He is probably best known for two commissions — the initial buildings for what was to become Old Dominion University, and the monumental Cavalier Hotel, built in 1927. The latter building underwent a $75 million restoration in 2017.

The Edward E. Neff House in Delaware retains its slate rood, corner turrent and gables. It has its original floor plan, and the interior features oak and cherry moldings and carved mantels.

The landmark house was placed on the National Register of Historic Places on January 28, 1988.