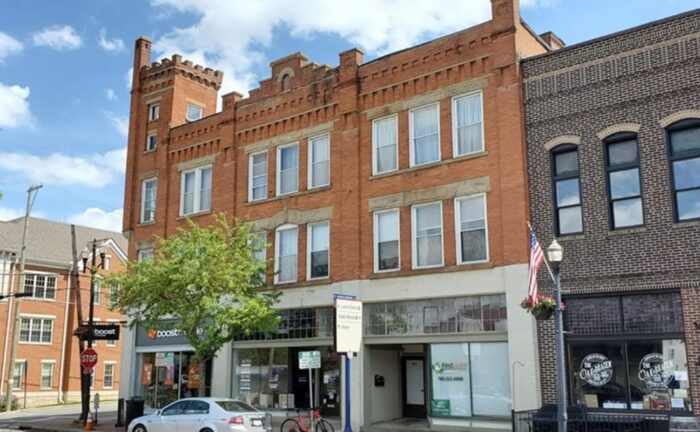 The sturdy brick structure at 42-46 East Winter Street was built as a hotel to replace a frame structure on the site, but that purpose didn’t last long. While it is not known who built the building, it is known that a railroad conductor was either involved or purchased the property very shortly after construction.

His name was James Holloran, although in at least one newspaper account he is known as Thomas Holloran. Holloran was a conductor on two rail lines, including the Cleveland, Columbus, Cincinnati, & St. Louis Railroad, also known as the “Big Four.” The Big Four connected Delaware to Columbus and Cleveland, and operated out of a depot still standing on East Lake Street.

Hollaran and his wife lived on Depot Street in Delaware for many years, and at least two of their children were born there. At some point, however, the Hollorans moved to Springfield, another city on the Big Four line. A 1902 newspaper article states that James Holloran purchased the building for $24,000.

In 1894, the Hotel Blee was listed in the book “Where to Stop: A Guide to the Best Hotels in the World.” In 1895, the sidewalk in front of the hotel was the scene of a dramatic mistake that made papers across the Midwest — when a traveling innocent businessman was seized by local law enforcement because they believed him to be a suspected Chicago embezzler. Fortunately, the local man happened to have a gold tooth, which proved that he was not the wanted man.

Shortly thereafter, however, the business began to fail. The 1902 newspaper article referred to above profiled the auction of the Hotel Blee, which was sold to a West Virginia businessman for just $11,000.

In 1907, some 300 young area men became charter members of the Young Mens Christian Association (YMCA), and the organization purchased the Hotel Blee for $20,000. It is ironic that the saloon that operated in the corner space had a year to go on its lease, so for twelve months the temperance-minded YMCA collected rent from a bar.

In 1926, the building was sold again to the Watson brothers who returned it to hotel use. It has continued to house retail and professional offices on the first floor, and in the 1990s was home to both the Delaware Area Chamber of Commerce and the Delaware County Convention and Visitors Bureau. The upper floors have been remodeled for apartment use.