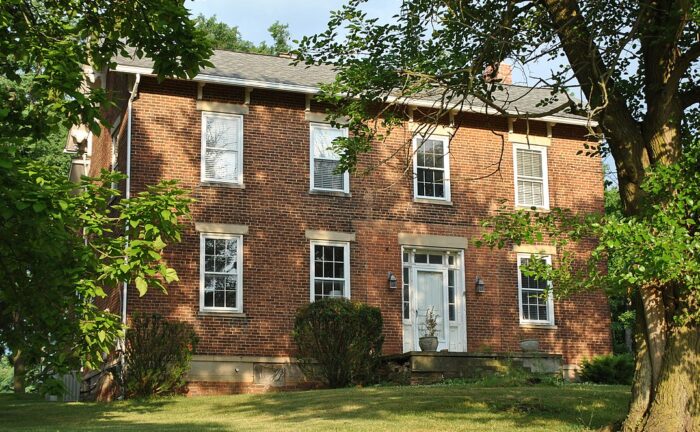 An Ohio historic marker recounts how the settlement and the road got their names: “Samuel Patterson arrived in East Orange in 1824 and, within a few years, began to hide runaway slaves in his home. He also invited anti-slavery speakers to the pulpit of the East Orange Methodist Church, which brought Patterson and his neighbors into conflict with the bishop. Following their consciences, they became the Wesleyan Methodists and built a new church. A pro-slavery neighbor mocked them by calling their community Africa, and so East Orange was renamed. The village has disappeared but several homes owned by Patterson and his neighbors still stand in this vicinity.”

In the years immediately preceding the Civil War, many sheltered and particularly at a sturdy two story brick residence owned by Stephen Sharp. Over 160 years later, that house still stands as serves as a reminder of that period in American history.

The house was constructed about 1857, with a one story addition added about 20 years later. There were originally 6 brick outbuildings on the site, most built in the later part of the 19th century.

Stephen Alfred Sharp was one of the sons of one of Westerville’s earliest settlers, Garrit (or “Garrett”) Sharp. The elder Sharp was instrumental in building up the Methodist Church in Westerville and was, like many Methodists, an ardent abolitionist, as were his sons. Each of the family’s houses were used by the Underground Railroad, possibly the largest concentration of such family homes in Ohio outside of the John Brown family houses in Ashtabula County.

Once at the Sharp House, escaping slaves would head to the Patterson House along Alum Creek and further north to Marengo.

Sharp was born in 1807 in Clinton, New York, and moved with his parents to Ohio about 1812. He was married twice, with most of his nine children born of his second wife, Hester Oldham. He died in 1886 and is buried in Westerville.

The house at 8025 Africa Road in rural Genoa Township is typical of its era, with a straight forward four bay front, plain sandstone lintels, and Greek Revival style front entrance with sidelights. An arch constructed chimney stands in the basement, an indicator of its date of construction.

The Stephen Sharp House has been listed on the National Register of Historic Places since 1982.