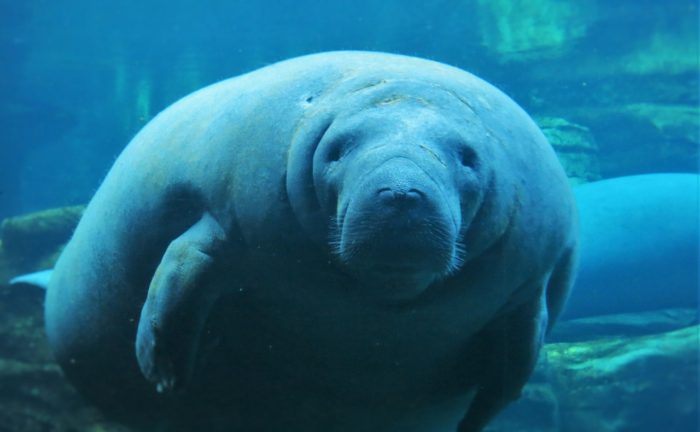 After being rescued as orphans off the coast of Florida in early 2018, manatees Carmen and Heavy Falcon have completed their rehabilitation at the Columbus Zoo and Aquarium and began their journey back to Florida late Monday night.

A member of the Zoo’s Animal Care team, along with one of the Zoo’s staff veterinarians, traveled with Carmen and Heavy Falcon and confirmed that they arrived safely at SeaWorld Orlando, where both manatees will complete their final preparations to be returned to the areas in Florida from which they were initially rescued.

Female manatee, Carmen, was rescued as a young calf, along with her mother, on February 8, 2018 off the coast of Florida. When rescuers discovered them, they found that Carmen was showing signs of cold stress and her mother was negatively buoyant. Unfortunately, just two days after their rescue, Carmen’s mother succumbed to her serious injuries, leaving her calf an orphan. Carmen began to build up her strength while in the care of a team of experts at SeaWorld Orlando before moving to the Columbus Zoo and Aquarium to complete her rehabilitation. She initially arrived at the Zoo without a name, and so a public naming opportunity, presented by Kroger, was launched on June 8, 2018, coinciding with World Oceans Day. On June 22, 2018, the Zoo announced that Carmen was the name that received the most website votes—a nod to “Carmen Ohio,” The Ohio State University’s alma mater that highlights the strong bonds of friendship.

Male manatee, Heavy Falcon, was found as an orphan in Crystal River, Fla. He received his name in honor of the SpaceX Falcon Heavy rocket launch that took place on February 6, 2018, which was also the day he was rescued and taken to SeaWorld Orlando to begin his rehabilitation journey.

With Carmen and Heavy Falcon now in Florida, the Columbus Zoo is currently caring for three manatees: Bananatee and Tostone, who were also both found as orphans in Florida, and long-term resident, Stubby. Due to the extensive injuries she received from a boat strike, Stubby is a conditionally non-releasable animal. Her condition is evaluated every five years to determine if she is ready or not to return to Florida, but it is unlikely that she will move out of this category. Instead, she has often assumed the role of a surrogate mother looking after the other manatees and is the first to greet newcomers during their introduction to the Zoo’s Manatee Coast habitat.

“It’s always difficult to say goodbye to the manatees when their rehabilitation at the Columbus Zoo and Aquarium has come to an end, but it’s also a time for celebration as their return to Florida is a remarkable achievement. We are extremely proud to participate in the Manatee Rescue & Rehabilitation Partnership and help make a positive difference not only for these individual manatees but also their species’ future,” said Becky Ellsworth, the Columbus Zoo and Aquarium’s Shores region curator.

The threatened Florida manatee is at risk from both natural and man-made causes of injury and mortality, including entanglement in or ingestion of fishing gear, crushing by flood gates or locks, and exposure to cold stress, disease, boat strikes, and red tide—a toxic algae bloom.

Though red tide events have occurred historically in Florida for centuries, in more recent years these events have grown significantly in scale and duration, suspected by researchers to be exacerbated by human activities. The Florida Fish and Wildlife Conservation Commission found that in 2018, red tide affected approximately 145 miles of Florida’s coastline, negatively impacting the state’s tourism industry and resulting in widespread fatalities of manatees, dolphins, fish, sea turtles and other marine species. The MRP continues to monitor the red tide event closely while remaining in frequent communication with State of Florida biologists and officials. As part of this collaboration, each manatee release is coordinated carefully to help the manatees avoid areas impacted by red tide. Additionally, the MRP employees a full-time biologist who travels throughout the state to check on the tracked manatees previously released as part of the MRP program to ensure they are not in need of assistance.

The Columbus Zoo and Aquarium also supports field conservation projects for three of four living species of manatees through its Conservation Fund. Providing grants to researchers on three continents (North America, South America and Africa), the Zoo contributes to rescue and rehabilitation in Florida, environmental education focused on the Amazonian manatee in Colombia, and critical population surveys for the least known species: the West African manatee.