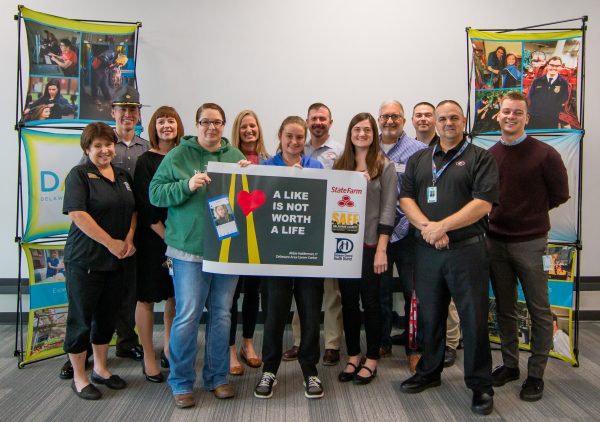 The week of Oct. 20-26, 2019 is designated as National Teen Driver Safety Week and members of the SAFE Delaware County Coalition are using the week to bring awareness to an increasingly tragic subject.

For the second year, SAFE along State Farm Insurance sponsored a billboard design contest in honor of Teen Driver Safety Week for area high school students. Abbie Halderman, 17, a senior at Delaware Area Career Center won the contest with her design titled “InstaLife”. The new design will be located on the billboard on Central Avenue in Delaware. Halderman was also awarded a $500 Amazon gift card along with a voucher to attend Better Ohio Teen Drivers, Inc.

“The week is a perfect time for parents to begin — and continue — a conversation with young drivers about driving safety, and to remind parents not to hand over the car keys until their teen knows the rules of the road,” said SAFE Coordinator Jackie Bain.

Motor vehicle crashes are the leading cause of death for teens 15 to 18 years old in the United States, ahead of all other types of injury, disease, and violence. In 2017, there were 2,247 people killed in crashes involving a teen driver (15-18 years old), of which 755 deaths were the teen driver — a 3% decrease from 2016. In fact, in 2017, there were an estimated 93,000 teen drivers injured in motor vehicle traffic crashes, and an estimated 293,000 people injured in crashes involving a teen driver, accounting for an estimated 11% of all those injured that year.

“Because of their lack of experience, teen drivers are a potential danger to themselves and to other drivers, which is why it is so important that parents take time to discuss driving safety with their teens,” said Bain. “Don’t be afraid to have this conversation every day.”

Bain added that explaining the rules and any other restrictions outlined in Ohio’s graduated driver licensing (GDL) law and the deadly consequences of unsafe driving practices can help encourage teens to exhibit safe driving behaviors.

For more information about National Teen Driver Safety Week and to learn safe driving tips to share with your teens, visit www.nhtsa.gov/road-safety/teen-driving.