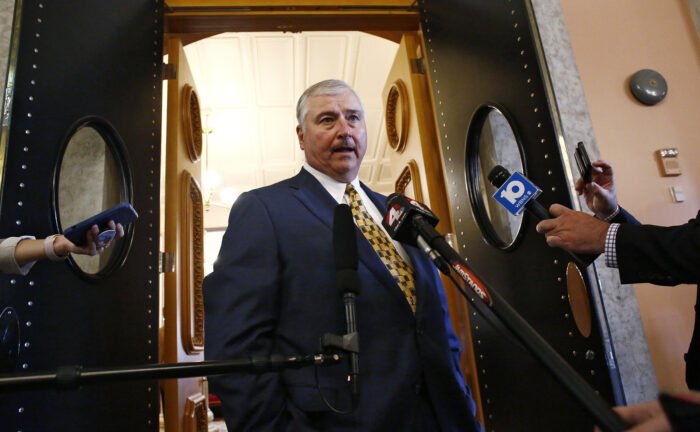 Ex-House Speaker Will Plead Not Guilty To Corruption Charge

COLUMBUS, Ohio (AP) — The former speaker of the Ohio House said Tuesday he will plead not guilty to a corruption charge following his arrest in a $60 million federal bribery probe that shook the Statehouse earlier this summer.

Rep. Larry Householder returned to the Statehouse for the first time since his July 21 arrest to the surprise of colleagues from both sides of the aisle. The former speaker said he’s back to represent his district and is confident that he will be exonerated.

Householder, a Republican from Glenford in southeastern Ohio, is scheduled for a court appearance Thursday and confirmed he has a lawyer after a nearly monthlong search for a new attorney.

“I believe in the justice system, and I believe if everything works the way it’s supposed to, the truth will come out,” he said, after arriving for a regularly scheduled House session. “And as I’ve said I’m innocent, and I intend to absolutely defend myself.”

The House and Senate are convening committee hearings to begin the process of repealing the legislation that prompted a federal grand jury to indict Householder and four of his associates in July. The effort has bipartisan support.

Householder, who was removed from his leadership post in a unanimous vote following his arrest, was one of the driving forces behind House Bill 6, the disputed legislation which added a fee to every electricity bill in the state and directed over $150 million a year, through 2026, to the plants near Cleveland and Toledo.

Householder and others are accused of helping shepherd energy company money for personal and political use as part of an effort to pass the legislation, then kill an attempt to repeat it at the ballot. The other four defendants have all pleaded not guilty.

Fellow GOP Rep. Scott Lipps said he was surprised to see Householder show up to the legislative session. “The division in the House is so deep right now,” said Lipp, who voted for House Bill 6 but against Householder’s speakership in 2019. “It’s deeper than any time I’ve ever been here and I’m worried about what’s going to happen.”

Republican Gov. Mike DeWine weighed in Tuesday on the legislative implications of the federal bribery probe. He said the House should replicate the gist of House Bill 6 in order to avoid the job loss at the nuclear plants, and because Ohio needs the non-carbon producing energy from those plants. However, the bill, as it was created, must be tossed out, the governor said.

“HB6 has been so tainted by what came out and what was disclosed that it needs to be repealed,” DeWine said during his coronavirus briefing.

Householder’s successor, newly elected Speaker Bob Cupp, announced Monday the creation of a new committee tasked with addressing the future of House Bill 6 after the federal affidavit released in late July cast doubt on the process by which the bill became law.

“Our goal is to have an open and thorough process for repealing House Bill 6 and replacing it with thoughtful legislation Ohioans can have confidence in,” Cupp, a Lima Republican, said in a statement commencing his first day of legislative action since becoming speaker on July 30.

Democratic lawmakers were quick to push back, blasting Cupp for “creating an unnecessary bureaucracy to complicate the process,” when a bill to repeal the legislation has already been introduced in the House. “It is obvious now that the Republicans do not actually want to repeal House Bill 6,” Reps. Michael Skindell and Michael O’Brien said in a statement Monday.

The Democratic lawmakers, who introduced a bill to repeal the energy law days after the federal investigation was revealed, say their Republican colleagues are working to thwart their efforts to bring the proposed legislation to the floor for a vote Tuesday by requiring the signatures needed by members to be provided in person and not electronically.

In the Senate, Sen. Sean O’Brien, a Democrat, and Republican Sen. Stephanie Kunze introduced in late July a bill to repeal and replace the energy law, which will have its first hearing Tuesday.
___
This story has been updated to correct the party affiliation of Sen. Sean O’Brien. He is a Democrat, not a Republican.
___
Associated Press writer Andrew Welsh-Huggins contributed to this report from Columbus. Farnoush Amiri is a corps member for the Associated Press/Report for America Statehouse News Initiative. Report for America is a nonprofit national service program that places journalists in local newsrooms to report on undercovered issues.

Photo: Ex-Ohio House Speaker Larry Householder talks to the media outside of the House of Representatives in the Ohio Statehouse, Tuesday, Sept. 1, 2020, in Columbus, Ohio. Householder said Tuesday he will plead not guilty to a corruption charge following his arrest in a $60 million federal bribery probe that shook the Statehouse earlier this summer. (Fred Squillante/The Columbus Dispatch via AP)