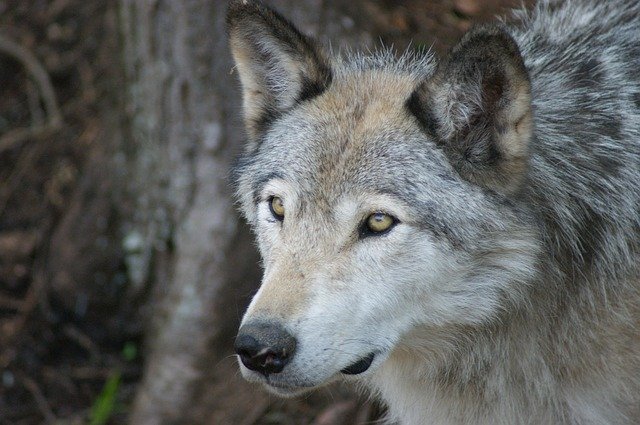 The Columbus Zoo and Aquarium recently announced the births of four Mexican gray wolf pups—the first to be born at the facility in 14 years. Their births mark a significant achievement for the future of the Mexican wolf, which is the rarest subspecies of gray wolf in North America.

The pups were born on May 6 to first-time parents, mother, Winter, and father, Storm. Through a closed-circuit camera, the Zoo’s animal care staff continues to monitor Winter and her pups in their den. The team reports that Winter has provided excellent care to the pups, whose eyes have recently opened, while Storm occasionally peeks in on them during breaks from patrolling the habitat.

In what they called a “Pupdate,” the Zoo shared news over the weekend that the pups were starting to venture out so that guests might be able to catch a glimpse of the new additions.

PUPDATE: The endangered four Mexican wolf pups are starting to venture out of their den with mom, Winter, and dad, Storm! These pups are now 1 month old and getting more curious each day, so guests might get the chance to see them. #savingspecies #savethelobo pic.twitter.com/rXI7QBO0m5

Both of the three-year-old adult wolves arrived at the Columbus Zoo earlier this year. Winter came to the Columbus Zoo on Dec. 17, 2018 from the Wolf Conservation Center in South Salem, New York, and Storm arrived on Dec. 11, 2018 from the Endangered Wolf Center in Eureka, Missouri. Winter and Storm were paired at Columbus Zoo through a collaborative effort between the Association of Zoos and Aquariums’ (AZA) Mexican Gray Wolf Species Survival Plan® (SSP) and the U.S. Fish and Wildlife Service’s (USFWS) Wolf Recovery Plan, which works to help reintroduce wolves to the southwestern United States.

The Columbus Zoo and Aquarium began participating in the recovery program in 1992 and since then has welcomed the births of 39 surviving pups, with one male being released into a wolf population area in New Mexico. For the past 8 years, a non-breeding pack had been cared for at the Columbus Zoo until the SSP recommended that the Zoo’s three remaining female wolves move to the Wildlife Science Center in Stacy, Minnesota on January 16, 2019. It was also recommended that Winter and Storm move to Columbus as a breeding pair in hopes of adding to the genetic diversity of this at-risk species.

“We are extremely proud to participate in this collaborative program working to protect the future of the this important species that nearly went extinct in the 1970s. The birth of these pups is to be celebrated as this achievement offers additional hope for the Mexican gray wolf,” said Columbus Zoo President and CEO Tom Stalf.

Thanks to conservation and education efforts, after nearly being wiped out in the U.S. and with only a few animals remaining in Mexico, the endangered Mexican gray wolf population is finally experiencing a small rebirth since the species was bred in human care and began to be reintroduced to its native range in the American Southwest beginning in 1998. In its annual survey conducted from November 2018 to January 2019, USFWS , which oversees the management of all Mexican wolves in the U.S., reported 131 wild wolves—64 in Arizona and 67 in New Mexico—a 12 percent increase from the 117 wolves documented since last year. However, Mexican gray wolves continue to face many natural threats and remain vulnerable to poachers, as well as habitat fragmentation, causing a ripple effect for the ecosystems to which they belong.

In addition to welcoming the arrival of the wolf pups, the Columbus Zoo’s animal care team has been directly involved in cross-fostering opportunities with wolf pups born in human care and wolves living in their native range. Through cross-fostering, wolf pups less than two weeks old that are born in human care are placed with same-age wolf litters in their native range. Recently, working with the Mexican Wolf Interagency Field Team (IFT) in collaboration with the Mesker Park Zoo in Evansville, Indiana, Columbus Zoo headkeeper Ashley Wright assisted in placing three of five wolf pups born at the Mesker Park Zoo with a foster mother with pups in a wild den. After the pups were placed, the IFT confirmed that the foster parents continued to exhibit behaviors consistent with denning. The IFT’s cross-fostering effort has been taking place since 2014 and continues to be utilized as another strategy to manage genetic diversity of Mexican gray wolves in their native range as the initiative has seen encouraging results with no reports of a foster mother abandoning the foster pups. Several cross-fostered pups that survived to the breeding age also now have their own pups.

While the Columbus Zoo team was prepared to cross-foster at least two of Winter’s pups, no wild Mexican gray wolf mothers gave birth within the necessary short timeframe to result in the pup placement this year. It is typical for the pups to remain with their mother for at least two years before they potentially move to establish a pack of their own.