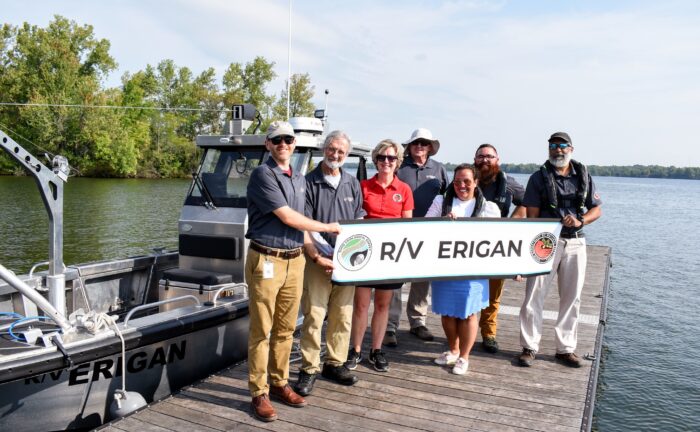 The Ohio Department of Natural Resources (ODNR) Division of Geological Survey has launched a new vessel to conduct important research on the geology of Lake Erie. Officially named Erigan before its maiden voyage at Alum Creek State Park on Tuesday, the boat is custom designed for research work and features a steel hull, making it robust enough for use on Ohio’s Great Lake.

Erigan is named after a prehistoric river theorized to have flowed between Ohio and Ontario, Canada. It will be used to help geologists better understand the sediments and rocks found on the lake bottom. Research includes analyzing the distribution of offshore sediments, measuring bathymetry (lake depth), and using side-scan sonar to identify patterns in sediments. The new boat also enables sub-bottom profiling studies that help geologists distinguish the loose top layer of sediment from the compacted materials beneath it.

“The Erigan represents our reinvigorated efforts to study Lake Erie” said Mike Angle, Division Chief and State Geologist. “The new boat will be critical to gathering the scientific evidence we need to better understand the nature and movement of Lake Erie sand and sediments.”

Sand is a very effective barrier to shore erosion, but it constantly is being moved and transported by water currents. Determining if sands move parallel to the shore, away from shore, or toward the shore is vital to mitigating shore erosion and assessing the effectiveness of shore structures.

Better knowledge of the lake bottom also helps researchers determine the health of fish and plant habitats. To learn more about the geology of Lake Erie, visit the ODNR Division of Geological Survey website, geology.ohiodnr.gov.

The Erigan replaces the Division’s previous research vessel, the GS-3. The GS-3 was donated to Stone Laboratory, a research facility managed by Ohio State University and located on Gibraltar Island.