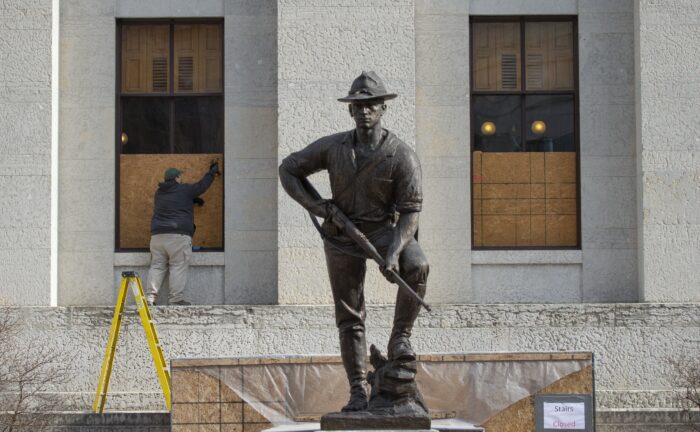 The request came from the U.S. National Guard Bureau on Thursday night, DeWine said. The governor previously authorized more than 700 Guard members for service in Washington.

DeWine has also authorized 580 National Guard members to provide security around the Ohio Statehouse in downtown Columbus through Wednesday, where they’re expected to be joined by numerous Columbus police officers and troopers with the Ohio State Highway Patrol.

Also on Friday, Columbus Mayor Andrew Ginther announced the closure of a number of city government buildings downtown, including City Hall, on Tuesday and Wednesday. The buildings will all be closed on Monday because of the Martin Luther King Jr. holiday.  “In the coming days, we will not allow hate, violence and destruction to constitute our city,” Ginther said during a briefing. “Hate has no place in Columbus or these United States of America.”

The mayor, along with Columbus Police Chief Tom Quinlan and other city leaders, urged residents to stay home and avoid the downtown area until after Inauguration Day.

“I am asking members of our community, if you do not have business downtown, please avoid the area,” Quinlan said. “There will be no tolerance for illegal activity. We are prepared for the activities that this city faces in the coming days.”

DeWine announced Thursday the closure of the Ohio Statehouse, where protests are suspected to be held, and all other state buildings for a week.

The governor and other state and local officials have still not disclosed any details about the anticipated size of the protests or how they have determined there will be any.

Many online platforms the groups used to share information have been banned in recent days, and it’s unclear what might happen in the coming days.

PHOTO: Ohio Statehouse maintenance employees board up the windows of the building behind the United Spanish War Veterans Memorial statue in preparation for planned weekend protests in Columbus, Ohio, on Thursday, Jan. 14, 2021. The Statehouse and all state buildings in downtown Columbus will be closed Sunday through Wednesday. (Adam Cairns/The Columbus Dispatch via AP)
___

Farnoush Amiri is a corps member for the Associated Press/Report for America Statehouse News Initiative. Report for America is a nonprofit national service program that places journalists in local newsrooms to report on undercovered issues.