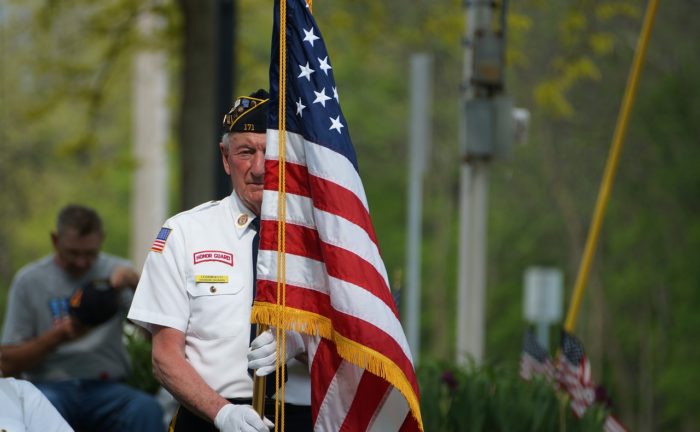 The City of Powell is hosting the annual Veterans Day Ceremony at 11 AM Monday, Nov. 11 at the Greater Powell Veterans Memorial in Village Green Park, 47 Hall Street.

The program will feature keynote speaker Rusty Dittoe who served in the United States Navy from 2005-2016. Dittoe flew a backpack UAV for the Navy’s Special Forces Unit. He was deployed four times to the Middle East, once to Japan and twice to Central America. Dittoe participated in two humanitarian aid/search and rescue missions during his time with the Navy and flew missions over Central America in support of the counter-narcotics efforts led by the Drug Enforcement Agency. Dittoe was injured overseas in 2012 and was later Honorably Discharged from the Navy in 2016.

The program will also recognize recent brick placements at the Greater Powell Veterans Memorial as well as vocal and instrumental performances.
A complimentary luncheon will be served following the Ceremony in the Powell Municipal Building East Room for all veterans and military personnel as well as their families. Food and coffee will be provided from City Barbeque, Shorty’s and Espresso 22.

In the event of inclement weather, the program will be moved inside the Municipal Building Council Chambers.

The Greater Powell Veterans Memorial is a place for reflection and remembrance of those who served the country. Veterans can be remembered and honored through the Greater Powell Veterans Memorial Brick Program. Veteran bricks feature the honoree’s name, branch of service, the name of the war in which he or she fought, specific achievement or years of service.