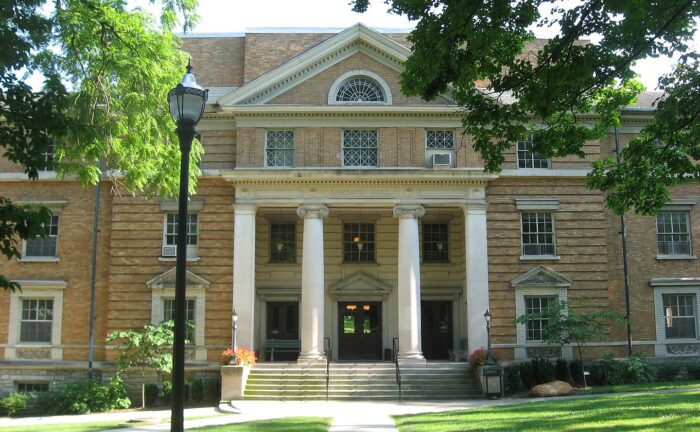 The location of Ohio Wesleyan University’s Sanborn Hall hearkens back to a key part of the university’s history.

It stands on Elizabeth Street on the Monnett Hall campus, an area named for the former Monnett Hall which stood near it. That building was constructed in 1857 to house the Ohio Wesleyan Female College, and for most of its life served as a women’s dormitory before its demolition in 1978.

That area seemed ideal to OWU Trustees when they received a generous gift from an alumna earmarked for a new music building.

Anna Sanborn Clason was a 1859 graduate of the Ohio Wesleyan Female College, and donated $53,000 for that purpose in memory of her mother, Martha S. Sanborn, and a brother who was killed in the Civil War, Benjamin F. Sanborn.

Trustees chose the New York City firm of D’Oench & Yost to design the structure. Yost was previously with the noted Columbus architect Frank Packard, where they designed collegiate buildings such as Orton Hall on the campus of The Ohio State University; Yost himself had drawn up plans for University Hall and Gray Chapel on the OWU main campus.

The contractor for the project was George Abernethy.

As built, Sanborn Hall contained 68 teaching, choral, organ, and practice rooms, as well as a recital hall seating 600. The total cost was approximately $6,000 more than what was donated; $3,200 was spent on new pianos; and the total for furnishings was $4,000. Reflecting its date of construction, the building was outfitted with both gas and electric light fixtures.

In 1983, Sanborn Hall was expanded and remodeled, with an addition including a new instrumental rehearsal hall and expanded library named for Theodore Presser, who founded OWU’s music department in 1872. It now has 57 classrooms, teaching studios and practice rooms. The building includes Jemison Auditorium, the site of many free music performances open to the community.

Sanborn Hall was constructed of buff colored brick and in a Neoclassical design. Its full pedimented front portico has two full Ionic and two engaged columns. The pediment features a half round window.

The building was placed on the National Register of Historic Places on March 18, 1985.