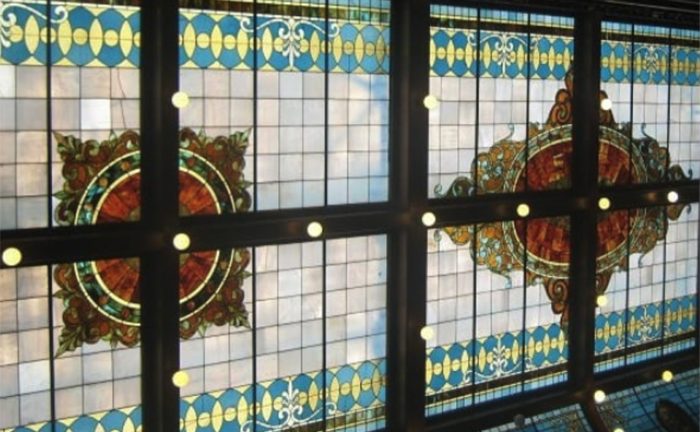 One of the historic gems on the campus of Ohio Wesleyan University is gaining new shine these days.

The University is undertaking an $11-million project to renovate Slocum Hall, including the restoration of its iconic Reading Room and its 70-foot-by-20-foot leaded glass ceiling. Slocum Hall is one of 10 locations on campus included on the National Register of Historic Places.

Sitting just north of Sturges Hall, Slocum Hall also was built as a library and opened in 1898. Sturges had been OWU’s library until that time. A heated controversy over the location of the new library erupted between the donor, Charles E. Slocum, and the OWU Trustees. Slocum wanted the trustees to demolish the inadequate Thomson Chapel, which was in disrepair, and build the new library on that site between University Hall and Sturges Hall facing South Sandusky Street. In the end, Slocum prevailed and the library replaced Thomson Chapel.

The building features a Romanesque arcade and, of course, the amazing skylight. The ceiling features 18 art glass portraits of thinkers ranging from Abraham Lincoln to William Shakespeare.

The restoration project was made possible through a recent $10 million gift, the largest in the school’s history, that will also renew OWU’s residential campus.