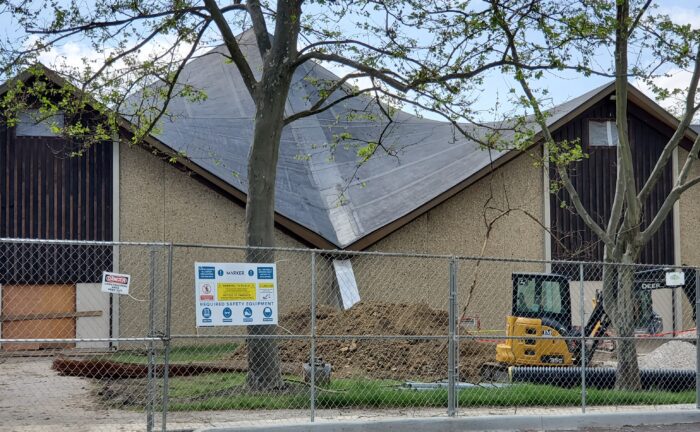 At the same time that financial pressures related to the COVID-19 pandemic have resulted in planned budget cuts at Ohio Wesleyan University, there is clear evidence that the school is moving at the same time to prepare for the future.

The large-scale project to renovate Branch Rickey Arena, for instance, home to the Battling Bishop wrestling, volleyball, and men’s and women’s basketball teams, is well underway.

The facility dates from the 1970s, and will be receiving substantial upgrades including new flooring, bleachers, scoreboards, lights, a sound system, air conditioning, and much more.

Other improvements include a new concession stand located in the former racquetball court location, as well as a new lounge to “…promote connection and camaraderie.”

Fundraising resulted in major gifts for the $4 million project as well as a number of smaller gifts from alumni and friends of the University.

At the time the project was announced, OWU President Rock Jones, Ph. D. shared, “We’re so excited to be able to renovate Branch Rickey Arena to support our student-athletes and everyone who uses it,” said President Rock Jones, Ph.D. “I’m grateful to Doug Dittrick, First Commonwealth Bank, and all of the donors who have helped to make this happen.”

It is clear to passers-by that work is proceeding apace. Not only are there construction sounds, but the area has been fenced off and equipment located on the grounds.