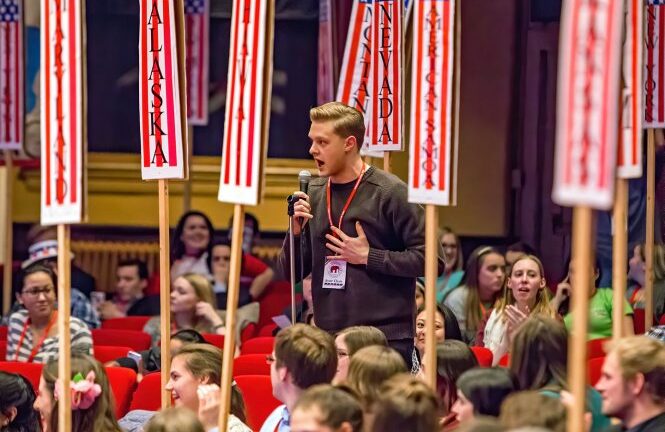 More than 300 Ohio Wesleyan students took the survey last month in classes representing all grade levels and multiple academic disciplines. It was administered during 11 AM classes on a designated Friday to capture a random sample of student interests and opinions.

The survey is part of Ohio Wesleyan’s 2020 Democratic Mock Presidential Convention, held on February 21-22. The simulated convention, an OWU tradition dating back to 1884, always focuses on the political party not currently occupying the White House.

As for their choice of presidential candidates, Ohio Wesleyan students said if the vote were tomorrow, their top Democratic vote-getters would be former Vice President Joe Biden (27%), U.S. Sen. Bernie Sanders, I-Vermont (25%), and U.S. Sen. Elizabeth Warren of Massachusetts (15%).

But the students also said if the general election were tomorrow, they believe Republican President Donald Trump would be returned to office (49%), with Sanders as his closest Democratic rival (20%). A total of 75% of the respondents said they plan to vote in November, though currently only 72% are registered.