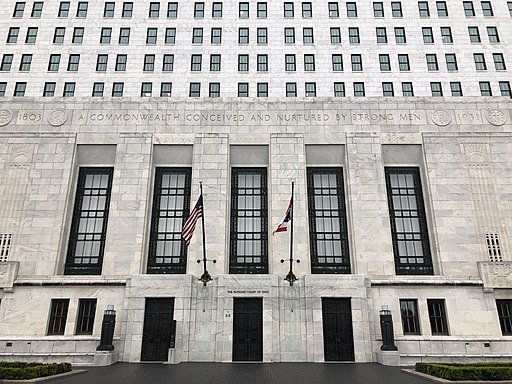 Arguments about the Electronic Classroom of Tomorrow have been going in multiple legal filings, and the latest debate is in the Ohio Supreme Court, who has been tasked with how to interpret the word “final.”

ECOT is fighting a decision by the Ohio Department of Education that said it owed about $80 million over two school years when it was found that enrollment numbers were inflated and the online school system was overfunded.

The Ohio Supreme Court listened to arguments Tuesday debating whether or not ECOT should be allowed to appeal the decision of the state DOE, in which they approved a report and recommendation which authorized the ODE to begin taking funding back from ECOT in order to recoup lost money.

The state was withholding $4 million per month in funding they determined was owed from overpayment, but when the school closed in 2018, that funding method came to a halt.

Under Ohio law, “any decision made by the (state board of education)…is final,” which is where the two sides differ on the proper means for ECOT to fight the decision of the DOE.

Marion Little, an attorney representing ECOT before the state’s highest court, said the school filed two different types of appeal purely to defend against what they called a constantly changing position from the state education agency. The second appeal has already been dismissed by the high court.

“It depended on the day of the week what position the board of education was taking as for what our rights were for the review, and so we appropriately pursued both courses of action,” Little said.

The differing positions went back to the Board of Education’s “quasi-judicial” process in which they agreed to the recommendation to take funding from ECOT.

“Even if you accept…that they had the statutory right to determine funding in the methodology they were posing, they had not followed the basic rules of administrative law in doing so,” Little said. “They did so on a retroactive basis, they did so without giving notice, they did so without setting forth standards.”

The DOE also acknowledges that this issue could have been resolved with a few extra words included in state law.

“The General Assembly could have said ‘final and appealable,’ as it has on other occasions, and it did not do that,” said attorney Erik Clark.

But since the legislature didn’t throw in extra words, Clark argued that the state supreme court should take their words as they would be taken by any average person.

This was also the finding of a lower court in 2017 when ECOT’s appeal of the Department of Education decision was dismissed.

“In so holding, the trial court focused exclusively on language in (Ohio law) providing that the BOE’s decision following an appeal is ‘final,’ and in doing so, determined that such language, standing alone, (ends the appeal),” appeal documents by ECOT stated.

A three-judge panel for the 10th District Court of Appeals reversed the decision of the lower court, saying ECOT could appeal the education board in court.

The confusion came with the Board of Education asked the 10th District Court of Appeals to reconsider their ruling, and another three-judge panel for the court of appeals reversed its own decision.

ECOT argued in documents to the supreme court that the court of appeals decision was reconsidered without the benefit of new evidence or arguments, risking setting a dangerous precedent.

“In other words, urging a judge to merely change his or her mind should not suffice,” Little wrote in court documents.

The supreme court should return a decision on the case in a matter of months.

Reposted here with permission; original post can be read here.