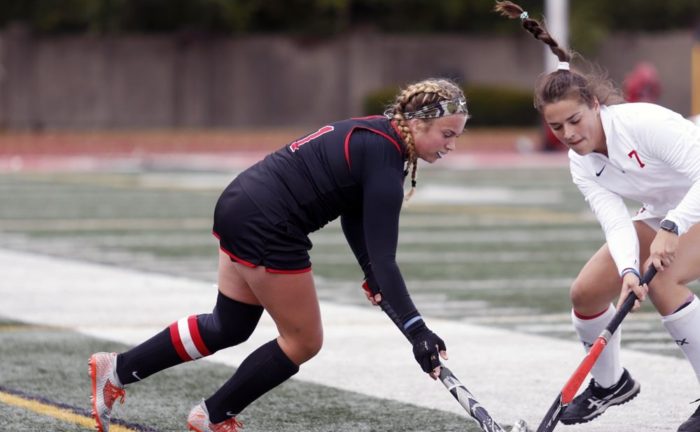 The Ohio Wesleyan win, combined with Denison’s 5-0 win over Oberlin and Kenyon’s 3-0 win over Wooster, left Ohio Wesleyan, Denison, and Kenyon tied for the conference championship, each with a record of 7-1. It marks the first time since 2007 that the NCAC has had tri-champions, when Kenyon, Wittenberg, and Wooster tied for the title with 8-4 records.

The conference championship is Ohio Wesleyan’s first since 1995. Ohio Wesleyan will be the No. 2 seed in next week’s NCAC tournament and will host third-seeded Kenyon in a tournament semifinal matchup at 3 p.m. on Wednesday at Selby Stadium.

Barno increased the margin to 3-0 with an unassisted goal midway through the third quarter.

Freshman midfielder Madisyn Bunke (Grand Rapids, Mich./Forest Hills Central) added to the lead with a goal during the fourth quarter, and Barno completed the hat trick with a goal with 1:27 left in regulation time. Freshman midfielder Veronica Hardman (Sydney, Australia/Ravenswood) was credited with an assist on the play.

Ohio Wesleyan outshot Allegheny, 32-5. Senior goalkeeper Marie Overing (Amsterdam, the Netherlands/Vossius Gymnasium) had 1 save in the Ohio Wesleyan cage. Hallie Reiger and Heather Amancio combined for 12 saves for the Gators.