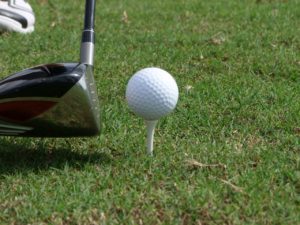 RESCUEDohio is hosting its first annual golf outing on April 25 at Mill Creek Golf Course. The golf outing will benefit RESCUEDohio and help us to provide care for homeless dogs in central Ohio.

The outing will include the following and so much more:

END_OF_DOCUMENT_TOKEN_TO_BE_REPLACED 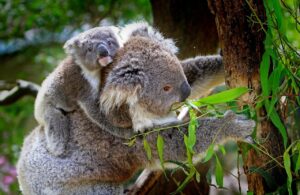 Guests who visit the Columbus Zoo and Aquarium’s Australia and the Islands region may discover a special surprise waiting for them. Katy the koala’s “baby bump” is now occasionally moving as her little joey, born on July 5, 2020, is developing inside her pouch!

Koalas are marsupials, which give birth to tiny, underdeveloped young that are the size of a jellybean. Unlike other mammals that develop in their mothers’ wombs, marsupial babies have to make their way from the birth canal to their mothers’ pouch. The good news is that Katy’s joey has already achieved this major milestone!

As the joey continues to grow, the baby will be protected inside Katy’s pouch, which she can open and close using a special muscle. Currently, the joey is approximately the size of a softball, finely furred, and has recently opened its eyes. For now, guests may catch a glimpse of a tiny arm or leg every once in a while until around mid-March when the joey will outgrow Katy’s pouch. END_OF_DOCUMENT_TOKEN_TO_BE_REPLACED 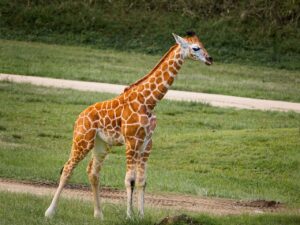 There’s even more cause for celebration in the Columbus Zoo and Aquarium’s Heart of Africa region, where a female Masai giraffe calf was born on Wednesday, December 9, at 11:06 AM. This is the third giraffe calf to be born at the Columbus Zoo this year, marking an important achievement for the conservation of this endangered species.

The Animal Care team, who was on 24-hour birth watch and observed the birth through a camera in the giraffe barn, reports that the calf born to 9-year-old mother, Digi, appears to be strong and alert. The calf was already fully standing and nursing shortly after birth. The care team was also delighted to observe the calf testing out her little “bunny hopping” and “running” (or “zoomies”) skills later that day. END_OF_DOCUMENT_TOKEN_TO_BE_REPLACED 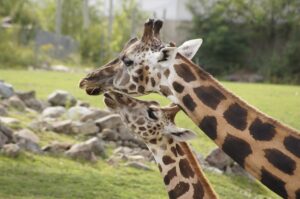 The Wilds is celebrating the birth of a male Masai giraffe calf, who was born in the pasture at 11:05 a.m. on August 4, 2020. Animal Management staff continues to monitor the calf and notes that he appears to be strong and is staying close to his mother, Lulu.

The calf’s father, Raha, was born at the Los Angeles Zoo in April 2006 and arrived at The Wilds in 2009, where he has since sired eight calves. Lulu was born at the Cincinnati Zoo and Botanical Garden in October 2012 and has lived at The Wilds since 2014. Lulu is an experienced mother, and this calf is her second. END_OF_DOCUMENT_TOKEN_TO_BE_REPLACED

Donate For Furry Friends This Holiday 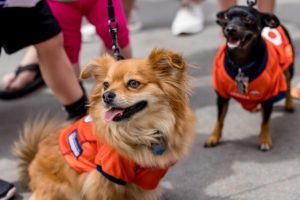 There’s an opportunity later this month to remember pets in your holiday giving.

The Holiday Pet Food Drive will take place from 11 AM to 4 PM this Saturday and Sunday, December 14 and 15 at Alum Creek Dog Park, 3993 Hollenback Road in Lewis Center. END_OF_DOCUMENT_TOKEN_TO_BE_REPLACED 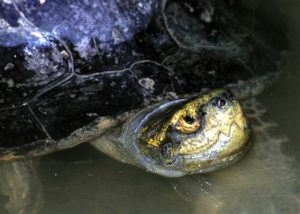 Two new babies at the Columbus Zoo and Aquarium may be tiny, but they bring big hopes for one of the most endangered species on the planet. On November 1 and 3, reptile keepers at the Zoo’s Shores region successfully hatched these rare yellow-headed temple turtles (Heosemys annandalii), the first ever hatched in an indoor zoological environment. The breakthrough is critical in efforts to boost the numbers of temple turtles, which are facing extinction. END_OF_DOCUMENT_TOKEN_TO_BE_REPLACED 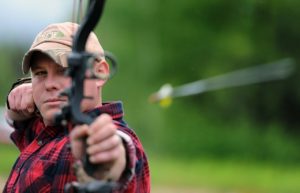 Ohio’s archery hunters have taken close to 75,000 white-tailed deer thus far during the early part of the season, according to the Ohio Department of Natural Resources (ODNR) Division of Wildlife. Through Tuesday, Nov. 26, archery hunters have checked 74,838 deer. Last year, archery accounted for 46% of the deer season total.

The count is higher than last year across the state and in Delaware County as well.
END_OF_DOCUMENT_TOKEN_TO_BE_REPLACED 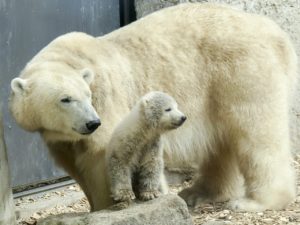 One of Delaware County’s newest residents is very small and very furry.

The Columbus Zoo and Aquarium welcomed a polar bear cub born on Thanksgiving Day, November 28, to mother, Aurora, and father, Lee. The Animal Care team notes that Aurora is being an attentive mother to her new cub, who has been observed nursing. As Aurora continues to care for her cub, she and her little one will remain in their private denning area behind the scenes until spring. END_OF_DOCUMENT_TOKEN_TO_BE_REPLACED 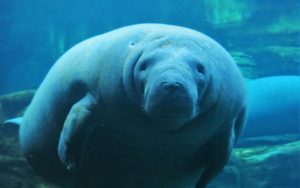 After being rescued as orphans off the coast of Florida in early 2018, manatees Carmen and Heavy Falcon have completed their rehabilitation at the Columbus Zoo and Aquarium and began their journey back to Florida late Monday night.

A member of the Zoo’s Animal Care team, along with one of the Zoo’s staff veterinarians, traveled with Carmen and Heavy Falcon and confirmed that they arrived safely at SeaWorld Orlando, where both manatees will complete their final preparations to be returned to the areas in Florida from which they were initially rescued.

Female manatee, Carmen, was rescued as a young calf, along with her mother, on February 8, 2018 off the coast of Florida. When rescuers discovered them, they found that Carmen was showing signs of cold stress and her mother was negatively buoyant. Unfortunately, just two days after their rescue, Carmen’s mother succumbed to her serious injuries, leaving her calf an orphan. Carmen began to build up her strength while in the care of a team of experts at SeaWorld Orlando before moving to the Columbus Zoo and Aquarium to complete her rehabilitation. She initially arrived at the Zoo without a name, and so a public naming opportunity, presented by Kroger, was launched on June 8, 2018, coinciding with World Oceans Day. On June 22, 2018, the Zoo announced that Carmen was the name that received the most website votes—a nod to “Carmen Ohio,” The Ohio State University’s alma mater that highlights the strong bonds of friendship.

Male manatee, Heavy Falcon, was found as an orphan in Crystal River, Fla. He received his name in honor of the SpaceX Falcon Heavy rocket launch that took place on February 6, 2018, which was also the day he was rescued and taken to SeaWorld Orlando to begin his rehabilitation journey.

With Carmen and Heavy Falcon now in Florida, the Columbus Zoo is currently caring for three manatees: Bananatee and Tostone, who were also both found as orphans in Florida, and long-term resident, Stubby. Due to the extensive injuries she received from a boat strike, Stubby is a conditionally non-releasable animal. Her condition is evaluated every five years to determine if she is ready or not to return to Florida, but it is unlikely that she will move out of this category. Instead, she has often assumed the role of a surrogate mother looking after the other manatees and is the first to greet newcomers during their introduction to the Zoo’s Manatee Coast habitat.

“It’s always difficult to say goodbye to the manatees when their rehabilitation at the Columbus Zoo and Aquarium has come to an end, but it’s also a time for celebration as their return to Florida is a remarkable achievement. We are extremely proud to participate in the Manatee Rescue & Rehabilitation Partnership and help make a positive difference not only for these individual manatees but also their species’ future,” said Becky Ellsworth, the Columbus Zoo and Aquarium’s Shores region curator.

The threatened Florida manatee is at risk from both natural and man-made causes of injury and mortality, including entanglement in or ingestion of fishing gear, crushing by flood gates or locks, and exposure to cold stress, disease, boat strikes, and red tide—a toxic algae bloom.

Though red tide events have occurred historically in Florida for centuries, in more recent years these events have grown significantly in scale and duration, suspected by researchers to be exacerbated by human activities. The Florida Fish and Wildlife Conservation Commission found that in 2018, red tide affected approximately 145 miles of Florida’s coastline, negatively impacting the state’s tourism industry and resulting in widespread fatalities of manatees, dolphins, fish, sea turtles and other marine species. The MRP continues to monitor the red tide event closely while remaining in frequent communication with State of Florida biologists and officials. As part of this collaboration, each manatee release is coordinated carefully to help the manatees avoid areas impacted by red tide. Additionally, the MRP employees a full-time biologist who travels throughout the state to check on the tracked manatees previously released as part of the MRP program to ensure they are not in need of assistance.

The Columbus Zoo and Aquarium also supports field conservation projects for three of four living species of manatees through its Conservation Fund. Providing grants to researchers on three continents (North America, South America and Africa), the Zoo contributes to rescue and rehabilitation in Florida, environmental education focused on the Amazonian manatee in Colombia, and critical population surveys for the least known species: the West African manatee.

This Show Is For The Dogs – Literally!

The Delaware Kennel Club All Breed and Junior Showmanship Dog Show begins on Saturday, October 27 and concludes on October 28 at the Delaware County Fairgrounds. The event runs from 7 AM to 7 PM each day, and most breeds will be shown on Saturday and Sunday. END_OF_DOCUMENT_TOKEN_TO_BE_REPLACED 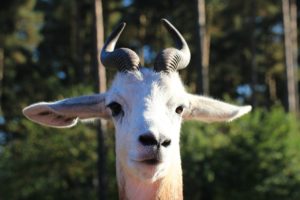 The Columbus Zoo and Aquarium is proud to announce the first two births of the 2019 calendar year— a dama gazelle and a silvered leaf langur. Both are considered at-risk species in their native ranges, and these births are important to helping to sustain their populations. END_OF_DOCUMENT_TOKEN_TO_BE_REPLACED