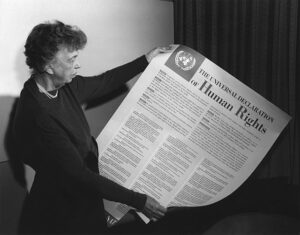 Largely because of it being the home of Ohio Wesleyan University, Delaware has had its fair share of famous visitors.

Presidents and First Ladies; Governors of Ohio; noted authors and politicians have included the city on speaking and engagement tours. In 1954, that included the former First Lady of the United States, Eleanor Roosevelt.

Roosevelt was on her own, of course, a highly respected political figure, diplomat, and activist. She engaged in frequent travel and was a noted public speaker. In January of that year her itinerary included an engagement at Ohio Wesleyan as part of a speaking tour at three Ohio colleges.

In her regular newspaper column (“My Day“) on January 19, 1954, she described her visit to Delaware and her lunch at Bun’s:

“Friday we spent most of the morning travelling from Miami University, Oxford, Ohio, to Ohio Wesleyan University. We arrived in Delaware, Ohio, in time to be taken for lunch to a delightful little restaurant run by a gentleman known as Mr. Bun because his father was a baker. His son is called “Biscuit” and another member of the family “Crumb,” so they are well identified with their occupation! The campus is separated by the village but really the village belongs to the campus and is part of it. END_OF_DOCUMENT_TOKEN_TO_BE_REPLACED

When Delaware County Welcomed: The Father Of Hungarian Democracy 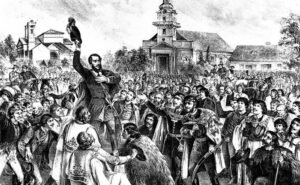 We’re doing a bit of a “spin” today on one of our standard series.

We have highlighted stories of visits to Delaware County by important figures of literary, academic, artistic, and political history in a series we call “When Delaware County Welcomed.” Through those posts, we have looked back in time to consider all of the well-known individuals who have stopped in the city.

Of course, many of these visitors came to Delaware, both because of its larger population than other county communities and because of the presence of Ohio Wesleyan University. Occasionally, these guests would some from some distance.

One of the first major world political figures to visit Delaware arrived in the winter of 1852, visiting the city on a tour across the Midwest. Lajos Kossuth, also known as Louis Kossuth, was a Hungarian nobleman, lawyer, journalist, politician, statesman and Governor-President of the Kingdom of Hungary during the revolution of 1848–49. END_OF_DOCUMENT_TOKEN_TO_BE_REPLACED 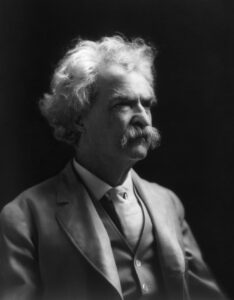 The date was February 10, 1885. That afternoon, three visitors to Delaware exited the train and secured transportation downtown. Making their way to the new City Hall and Opera House, they made their way to the second floor.

One of the men was a well-known novelist of the day, a man known for his written and vocal representations of life in the southern United States. One of the others was an American icon of the first order, an author, raconteur, and humorist.

The two, who were in the midst of their “Twins of Genius” Tour, were George Washington Cable and Samuel L. Clemens, better known as “Mark Twain.” END_OF_DOCUMENT_TOKEN_TO_BE_REPLACED 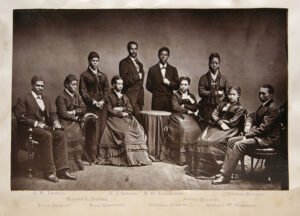 Did you know that Delaware is one of the places where American musical history was made?

That month a concert took place in Delaware featuring a group of singers from Fisk University in Nashville, Tennessee. That institution of learning, founded a few years previously to provide African American students with the best education possible, was struggling in the post-War south and faced bankruptcy. The idea was advanced by Fisk’s treasurer to have a number of students form a choir which would travel to raise funds for the college. END_OF_DOCUMENT_TOKEN_TO_BE_REPLACED 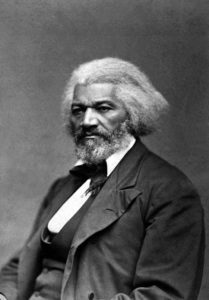 Originally shared in 2018, this article has been updated with additional information.

Throughout its 210 year history, this part of Ohio has been visited by several individuals with significant places in history. Today, we look at one man who visited Delaware County no fewer than three times over a 27 year period. END_OF_DOCUMENT_TOKEN_TO_BE_REPLACED