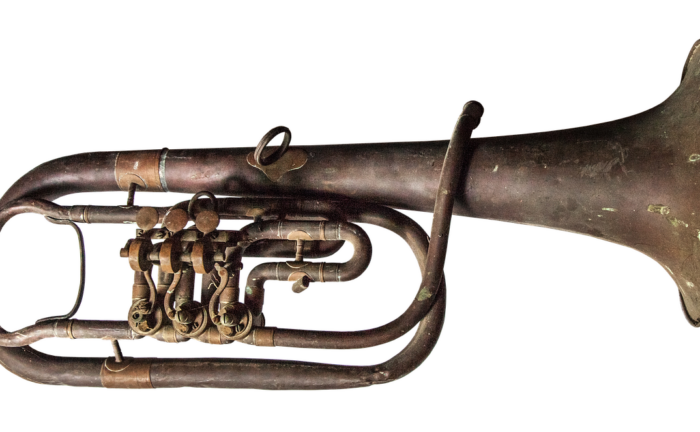 In a piece entitled “The American Brass Band Movement” on the website of the Library of Congress, it shares, “The early 1850s saw the brief flowering of a brilliant style of brass band music that constitutes an important but insufficiently explored part of our musical past.1 The cornets and saxhorns that made up the all-brass bands of the 1850s and remained a popular, though decreasingly prominent, feature of American wind bands through the nineteenth century were capable of producing, in the hands of good players, music of great charm and style.”

In Delaware, the earliest mention we have found of a “Delaware Brass Band” was notice of an 1859 concert to be held in Templar Hall, a building that survives downtown and has been included as a post in our “Landmarks of Delaware County” series. The organization had a short period of concertizing before being recruited to join in the war effort.

In 1861, the Delaware Brass Band became the regimental band for the 63td Ohio Voluntary Infantry, a unit which organized at Camp Putnam, near Marietta. The musicians served until the end of that year when a regimental merger resulted in its discharge.

Before they left Delaware, however, the members of the Delaware Brass Band were involved in a tumultuous scene as crowds saw them off for battle. The band entertained those in attendance with “Hail, Columbia” and the “Star Spangled Banner, as well as several other “airs.”

Brass bands, of course, were typified by their exclusion of woodwind instruments (flutes, clarinets, etc.).