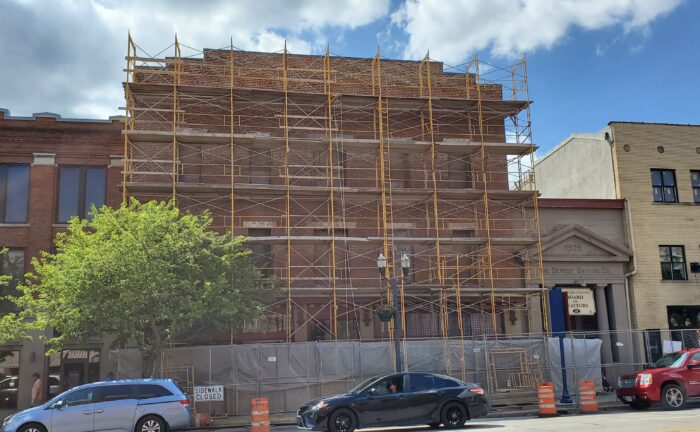 Today we’re sharing another post in our Landmarks of Delaware County series.

There are few buildings in central Ohio as connected with regional and national history as that at 17-19 North Sandusky Street in downtown Delaware. This spring and summer, the structure is reconnecting with its past in a very visual manner.

It is believed that the three story Templar Hall was constructed about 1853 or shortly thereafter. It was certainly standing on June 6, 1856, when it was the scene for the first visit and speech of noted national political and social leader Frederick Douglass in Delaware (see more about that visit here).

Templar Hall had been constructed by the Sons of Temperance, a fraternal organization composed of men who supported the temperance (anti-drinking) movement. The organization still exists today. It shortly thereafter began to be used by numerous local groups, and the local lodge of the Freemasons met here as well. 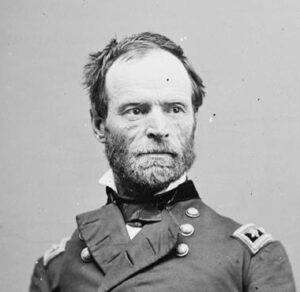 Douglass’ 1856 speech was followed in 1868 by one given by noted Civil War General William Tecumseh Sherman. In 1863, Ohio Wesleyan University students gave a performance in the Hall of “full patriotic scenes” in full costume, reenacting events such as the signing of the Declaration of Independence.

The role of the building in the abolitionist field was continued as a location for speeches to raise support for African-American units fighting for the Union Army; after the war, an important meeting there gave impetus to the desegregation of Masonic lodges across the country.

Over the building’s amazing almost 170 year history, it has been home to clothiers, insurance agents, barbers, a billiard parlor, hardware stores, attorneys, restaurants, a cafeteria, and as many Delawareans will remember, the US Store. It was in the 1970s that the facade was remodeled to match other Italianate buildings on Sandusky Street through the addition of decorative cornices on the top and over the storefronts and a trim board under the third floor windows.

Templar Hall’s first floor housed an antiques and collectibles business from 1998 to 2008, and the storefront facades were remodeled in 2012 to restore them to a more historic appearance.

In February, 2019, the current owners went before the City of Delaware Historic Preservation Commission with an exciting proposal to restore the entire building facade to its original appearance, and to replace missing elements. Paint would be removed and masonry restored. The rear one story addition, added in 1909, would also be repaired and restored.

That work is well underway; the above photo was taken on May 23, 2020. On September 4 of that year, we visited the Hidden Spaces Tour in downtown Delaware, and we visited the interior of Templar Hall. Our photo of the meeting room can be seen here: