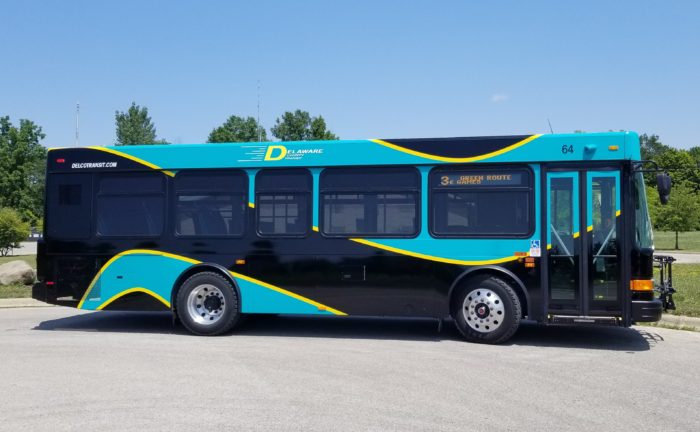 Your Local Bus System Just Got A New Name

The Delaware County Transit Board who oversees the transit system voted to change the name at a recent board meeting.

Delaware County Transit Director, Denny Schooley, says “We decided to do this for several reasons. First, was a mis-conception among some in the community that we were not public transit, but rather had something to do with data information, for example, a mobile Wi-Fi or that we were county vehicles doing property evaluations.

Also, because Delaware County and Delaware City share the same name, there was some confusion about who and where we serve. The new name makes it clear the we are transit for all of Delaware County.”

Delaware County Transit unveiled its new name with its brand new 29-foot Gillig bus at Delaware City’s Fourth of July parade. The new 28 passenger bus also sports a fresh eye catching bold graphic design. The transit system will use similar designs and colors on four new transit vans that are due to be ordered soon.

Over the next few months passengers will see a transition to the new logo on the organization’s buses, signage, uniforms, website, social media, publications and in general communications.

Crystal James, the transit system’s Operations Director, said “While we have a lot of changing to do with the name change internally, I’m confident that our current bus riders will experience the same great service that they always have.”