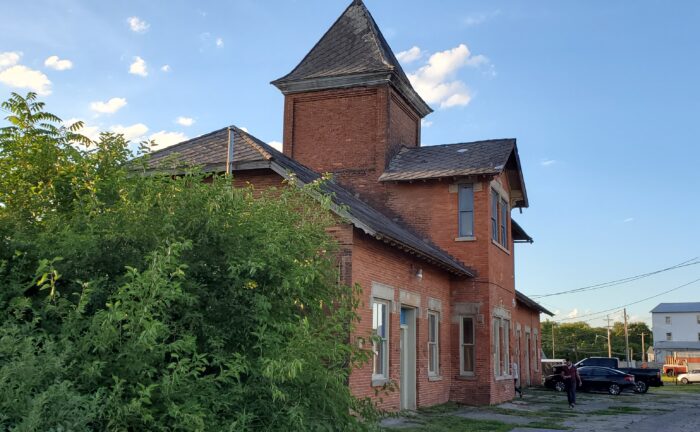 The 134-year-old railroad passenger depot on Delaware’s Lake Street is a real survivor.

Known by some as the “Big Four” Depot, it actually predates Delaware’s connection to that famed route. In January 1887, when it opened to the public, it was on the Cleveland, Columbus, Cincinnati & Indianapolis Railroad, known as the “Bee Line.”

In 1889, the Bee Line was purchased by the Cleveland, Cincinnati, Chicago, and St. Louis Railroad, the “Big Four.”

Two days after opening day in early January, the newspaper in nearby Marysville reported, “The new depot of the Bee Line was dedicated on Tuesday evening last by speaking, dancing, and a good time generally. It is the most substantial depot on the line of this road, outside of Cleveland, Columbus, and Cincinnati.”

The building replaced an earlier rail depot built in the 1850s located north of East Winter Street and south of East Central Avenue between tracks curving east and west.

The rail line was state of the art in its construction. Less than a month later, another paper touted its speed, calling it “the fastest train in the world.” It was clocked going in excess of 60 miles per hour, it said.

The design of the building is reminiscent of similar depots of that vintage on the same line. The 2006 City of Delaware East Side Historic Properties Survey Report shared: “The picturesque passenger depot has characteristics that are typical of the building type from the late nineteenth century, such as its modified rectangular plan with a two-story projecting mid-section, central tower, asymmetrical design, and mixed roof types including pyramidal, gable and clipped gable.”

Passenger service stopped in the mid 1960s, and freight service by the end of that decade.

Recently, announcement was made of RiverWest Partners’ plan to restore and renovate the Depot for commercial use. That story can be found here. Last year, 1808Delaware toured the Depot and photos from that visit are in the story below.