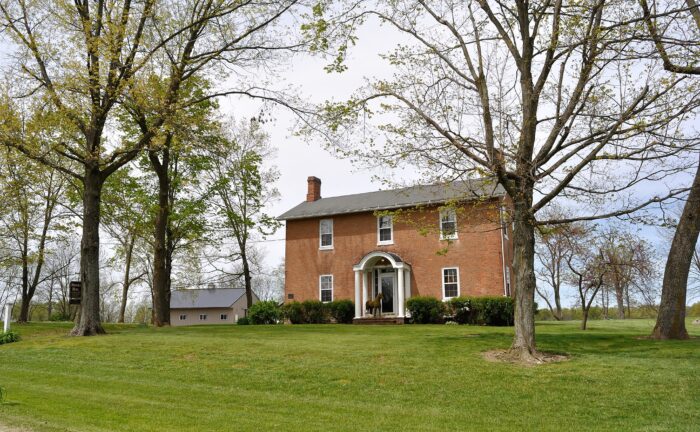 The phrase “I House” is not an official term, but it is a widely accepted way to describe houses from the early to mid 19th century across the Midwest and South that follow a particular pattern.

A southern historian named them “I Houses” because of the multitude built in the states of Iowa, Illinois, and Indiana. Ohio, of course, had its share as well.

The 1860 census of Scioto Township lists farmer William Felkner as living at the property, which was worth $3200, with his second wife and three children — two boys and a daughter, Jane, who went by “Jennie.”

Jane Felkner married Isaac Anderson, and the Andersons lived in the house after William Felkner’s death in 1903. In recent years it has been used as a cafe and antique store.

And, as a treat, this is one Landmark of Delaware County where you can view current photos (January 2021) of the interior, as the property is or has been recently listed for sale. This might not be true if you are viewing this post at a future date. NOTE — Click on the icon next to 53 on the bottom right).

The Felkner-Anderson House was placed on the National Register of Historic Places on February 11, 1988.