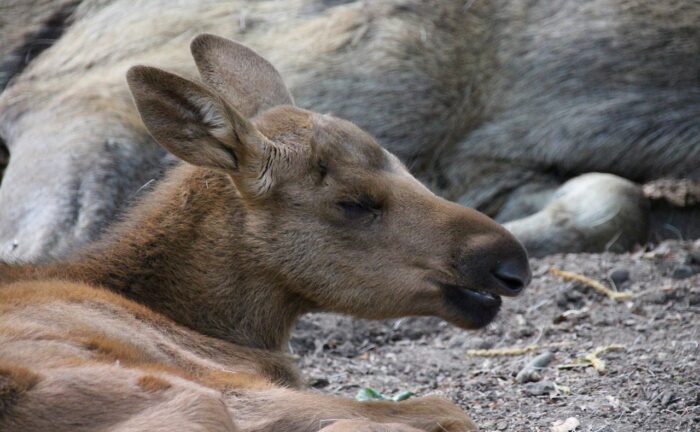 She’s curious and—as her name suggests—very sweet with her devoted care team. After a challenging and heartbreaking start in her young life, Strawberry, an orphaned female moose, now calls the Columbus Zoo and Aquarium home.

The Zoo’s newest resident arrived from the Alaska Zoo on October 12, 2021 accompanied by the Columbus Zoo’s Vice President of Animal Health and the assistant curator of the facility’s North America region, where Strawberry is settling in. Estimated to be approximately 4-6 months old, Strawberry is just a little over 5 feet tall and weighed about 390 pounds when she first arrived in Columbus. Strawberry’s care team reports that while she continues to explore and learn her way around her new surroundings, she is eating well and gaining weight. She receives a bottle from her keepers in the morning as supplemental feeding and receives grain and browse throughout the rest of the day.

Found in Anchorage, Alaska on Strawberry Road (the inspiration for her name), neighborhood residents spotted the young moose calf without her mother in June 2021. The pair had previously been seen in the area, and it was unusual for the calf’s mother—who residents observed to be a beautiful, good-sized moose—to not be with her calf. The Alaska Zoo’s Deputy Curator also lives on that road and saw the calf after neighbors contacted Alaska Department of Fish and Game biologists with concerns that she was also trying to cross roads. For two days, Strawberry was observed and since there were no signs of her mother, the biologists determined that she was gone. Strawberry was then taken to the Alaska Zoo for care. Because the Alaska Zoo is caring for several orphaned moose and has two adult bull moose as residents, the Alaska Zoo was unable to permanently house additional moose at this time. However, the Alaska Zoo worked with the Alaska Department of Fish and Game and the U.S. Fish and Wildlife Service to line up permanent homes at other facilities for a couple of the calves. The Columbus Zoo was selected to be Strawberry’s new home while the NEW Zoo & Adventure Park in Wisconsin received another orphaned moose, Taco.

Strawberry’s care team has provided her with access to one of the moose yards so that she has the opportunity to explore the sights and smells of the habitat. Strawberry is still undergoing the mandatory quarantine period for a new arrival and has not yet been officially introduced in the same space to the Zoo’s other female moose resident, Bertha. However, Strawberry and Bertha can see each other and are certainly interested in one another. Bertha arrived at the Columbus Zoo in 2013 at approximately 3 months old. Like Strawberry, Bertha was an orphan who was cared for by the Alaska Zoo after a brown bear pursued her mother.

“As zoo and aquarium professionals, our Animal Care team at the Columbus Zoo is happy that we have the expertise and facilities to provide orphaned animals like Strawberry and Bertha with exceptional care. These two moose certainly had a challenging start in life. While we wish that nothing had happened to their mothers, we are proud to be able to provide them with the second chance that they deserve, while also inspiring our guests to learn more about this important North American species.” said Dr. Jan Ramer, Senior Vice President of Animal Care and Conservation at the Columbus Zoo and Aquarium.

Moose, a wildlife icon in North America, can be found in the northern regions of the United States, from Maine to Washington, into Alaska, and throughout Canada. Known as elk in Eurasia, their populations also range from northern Europe to northeastern Siberia. There are four North American subspecies (and four in Eurasia), and Strawberry is considered to be an Alaskan moose (Alces alces gigas). Alaskan moose are the largest deer in the world by mass and stand approximately 6 feet tall from hoof to shoulder while weighing in at more than 1,000 pounds.

While moose are not listed as a threatened or endangered species, moose populations continue to be monitored. They face serious challenges in their native ranges, including being struck by cars and habitat degradation. Additional threats linked to climate change have also negatively impacted moose populations, including overheating, disease linked to parasitic brain worms carried by white-tailed deer whose populations are increasing in moose habitat, and tick infestations that result in anemia in moose. As more information continues to be gathered by wildlife experts and researchers, regulations in recreational activities, development, and other fields continue to be modified while educational initiatives also focus on helping citizens learn how to reduce their carbon footprint to benefit wildlife.

Guests who visit the Columbus Zoo may have an opportunity to view Strawberry in the moose yard across from the reindeer habitat, though Strawberry will determine when she decides to venture into the yard and when she stays in her barn. Guests can also enjoy learning more about the other species in the Zoo’s North America region—many of whom were also placed as rescues, including brown bear brothers, Brutus and Buckeye; cougars, Captain Cal, Goldie, and Poppy; black bears, Joanie and Stevie; bald eagles, Zuni, Sioux, and Cheyenne; and other species in the aviary.

For additional updates about Strawberry and other animals at the Columbus Zoo, events, and more, be sure to follow the Zoo’s social media accounts on Facebook, Instagram and Twitter, and visit us at ColumbusZoo.org.

Source: Columbus Zoo and Aquarium; Image by Jasmin777 from Pixabay