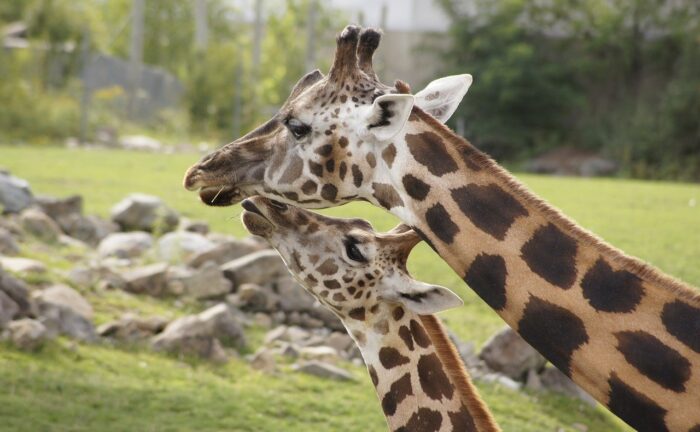 From: Columbus Zoo and Aquarium; 1808Delaware

Recent births at the Columbus Zoo and Aquarium are contributing to important species populations at risk for survival, including a Masai giraffe calf, a sea lion pup, two red panda cubs, and a siamang (gibbon) baby.

Today on 1808Delaware, we are sharing information about the first of these births, a giraffe calf who arrived in the world this past weekend.

“We are extremely proud to welcome these babies as they all represent hope for the future of species that are increasingly facing challenges in their native ranges,” said Columbus Zoo and Aquarium President/CEO Tom Stalf. “Additionally, these arrivals are extra special as our Animal Care staff has worked around the clock to ensure the animals continued to receive top quality care during our three-month-long closure to help reduce the spread of coronavirus [COVID-19] within the community. We appreciate our community’s support and as we have been able to once again welcome back our guests, we are excited to share in these successes with them as we all work together to help protect wildlife and wild places.”

Eighteen giraffes have been born at the Columbus Zoo over the course of its history. Zuri gave birth to a calf in October 2018; however, the calf passed away from viral enteritis at 17 days old despite aggressive treatment and diagnostics from the Zoo’s Animal Health team and specialists from The Ohio State University. According to the Association of Zoos and Aquariums (AZA), the mortality rate for giraffe calves in human care is about 25 percent while the mortality rate for giraffe calves in their native range is over 50 percent. Scientists also estimate that only a quarter of giraffe calves reach adulthood in their native ranges due to a variety of threats.

The Columbus Zoo’s Animal Care team, who is observing Zuri and her newborn very closely via camera monitors, reports that Zuri is being a great mother. After many good attempts, the calf stood and took a few steps at 3:24 p.m. and was nursing by 4:44 p.m.

The sex of the calf is not yet known and as the calf seems to be healthy, staff is providing time for Zuri to bond with her calf. A well check will be done in the coming days.

The pairing of Zuri and Enzi was recommended by the Species Survival Plan® (SSP), a program coordinated by the AZA to maintain genetic diversity of threatened and endangered species in human care.

In 2019, the International Union for Conservation of Nature (IUCN) listed the Masai giraffe subspecies as endangered as the population has fallen by nearly 50 percent over the last three decades. There are estimated to be only 35,000 Masai giraffe remaining due to various factors, including habitat loss, civil unrest/military operations, poaching and ecological changes.

The Columbus Zoo is a supporter of several direct giraffe conservation initiatives and has raised a total of $242,646 for giraffe projects since 2009. The Zoo also previously provided a one-time $56,679 grant to the Giraffe Conservation Foundation through the Zoo’s Wine for Wildlife Fund-A-Need.

Additionally, the Columbus Zoo and Aquarium and the Cheyenne Mountain Zoo in Colorado are the co-founders of the giraffe plasma bank and, along with several other collaborating zoos, work to consistently collect large volumes of plasma from giraffe to send to animals in need of a transfusion. These plasma transfusions have been responsible for assisting in saving the lives of several young giraffe across the country as the vital antibodies and critical proteins in the plasma help provide a life-saving boost to calves’ immune systems. Collection of the plasma is the result of the hard work and dedication of the Animal Care and Animal Health teams who have trained members of the giraffe herd to participate in these large volume blood collections completely awake and voluntarily.

While guests won’t yet be able to view Zuri and her calf, guests can still see other members of the herd—including Enzi—as well as participate in $3 giraffe feedings from 9 a.m. – 7 p.m. daily to receive an up close, memorable experience.

Image by janicklh33 from Pixabay