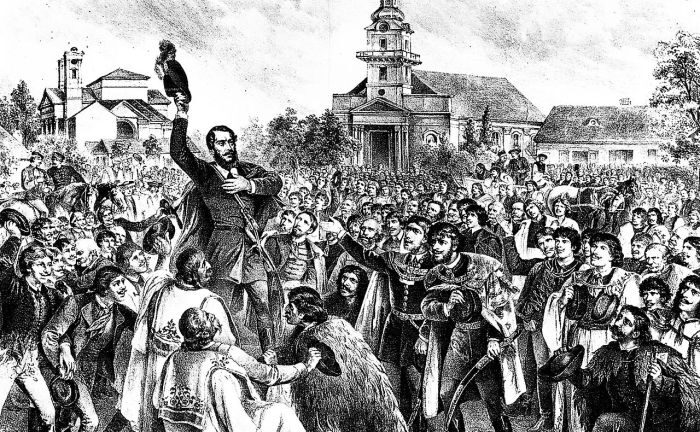 When Delaware County Welcomed: The Father Of Hungarian Democracy

We’re doing a bit of a “spin” today on one of our standard series.

We have highlighted stories of visits to Delaware County by important figures of literary, academic, artistic, and political history in a series we call “When Delaware County Welcomed.” Through those posts, we have looked back in time to consider all of the well-known individuals who have stopped in the city.

Of course, many of these visitors came to Delaware, both because of its larger population than other county communities and because of the presence of Ohio Wesleyan University. Occasionally, these guests would some from some distance.

One of the first major world political figures to visit Delaware arrived in the winter of 1852, visiting the city on a tour across the Midwest. Lajos Kossuth, also known as Louis Kossuth, was a Hungarian nobleman, lawyer, journalist, politician, statesman and Governor-President of the Kingdom of Hungary during the revolution of 1848–49.

Because of his remarkable role, he was widely known as the “Father of Hungarian Democracy.”

In February 1852, just a year or so after the rail line came through Delaware, Kossuth arrived here on his tour of the United States. Historians have noted what the reception was like in many of the small American communities he visited. One account says this about this time in Delaware:

“An immense crowd had assembled, and when the cars neared the depot the cheering was very enthusiastic.

The train was switched about the Delaware branch and the Governor and Suite, and the different committees were invited to visit the town by Dr. Hills, on the part of the people…When Kossuth had been conducted upon the platform in front of the pulpit, Dr. Hills, in a few words, introduced him as a representative of a nation that had for a time lost its nationality, and whose mission was to restore that nationality.”

Kossuth spoke with raw emotion to the crowd in Delaware. “And oh! how I love thee, my poor native land! How I love thee in thy gloom! How keenly thy sorrows affect my bleeding heart! How I long for thee, my own dear native land, with the fond desire of an exile’s heart! Home of my people! which I left, and which God will once more lead on the path of glory and freedom!

A few days later he spoke to the Ohio General Assembly in Columbus, where he uttered famous words, “All for the People and All by the People; Nothing About the People Without the People. This is Democracy!”

Kossuth made an impression on the people of the United States. He is honored today by a Kossuth County in the state of Iowa; towns with his name in Indiana, Ohio and Mississippi; and settlements with a Kossuth post office are in Pennsylvania. In addition, there are three Kossuth statues in the US: in New York, Cleveland and Washington.

You can learn more about Kossuth in the video below.