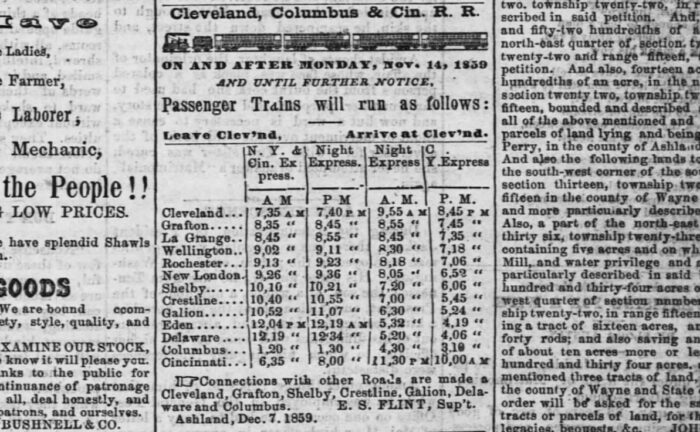 By 1808Delaware – Updated with additional information

Did you know that President Abraham Lincoln was in Delaware during his lifetime?

Local historians are already aware that Lincoln’s funeral train came through Delaware County on the morning of April 29, 1865, passing through Ashley, Delaware, and Lewis Center.

It was noted at the time by news correspondents that when the train reached Ashley at 5:43 AM: “ Groups of people are clustered about the depot and the green lots surrounding. The men are all uncovered, and the women look, in deep sympathy as we speed onward.”

The following was written about the travel through southern Delaware County; the train reached Lewis Center at 6:31 AM: “A large concourse of people, who gave every evidence of respect for the dead. The depot is tastefully decorated. Eden, Berlin and Orange, paid their respects to the great dead.”

What has recently come to light, however, is that Abraham Lincoln actually came through Delaware County during his life and, for a few minutes at least, was on a train sitting near the then railroad depot in Delaware.

It is well-known in the Crawford County village of Crestline that Lincoln changed trains there as he came east to speak to a gathering at the Ohio Statehouse in Columbus. That speech took place on September 16, 1859, over a year before the presidential election of 1860.

Lincoln had been in Springfield, as evidenced by trial records indicating that he had been defense attorney in a trial that week.

As he came from Illinois, he would have come through on the Pennsylvania Railroad line, changed at Crestline to the Cleveland, Columbus, & Cincinnati Railroad (in 1868 adding “St. Louis” to its name and becoming the “Big Four Railroad”), and then heading south to Columbus.

A train schedule from that era shows that stations on that line, south of Crestline, at which transfers could be made included Galion, Eden (Leonardsburg), and Delaware. The Delaware CC&C depot was not far removed from its current location. According to the website ohstations, “The 1866 Atlas for the City of Delaware shows on a map a passenger depot north of East Winter Street, and south of E Berkshire Street (now E. Central Ave) between the tracks curving west and tracks curving east… The map also show a track south of the depot crossing from the east side of depot to join the track heading west on the west side of the depot.”

Lincoln’s remarks at the Ohio Statehouse on September 16 were a reprisal of his famous “House Divided” speech. More information on that speech is available here.