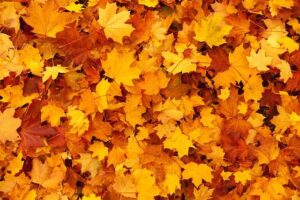 While some areas are now seeing near peak conditions of fall color, patchy conditions continue throughout the Buckeye State due to cloudy, rainy weather and warmer temperatures, according to the Ohio Department of Natural Resources (ODNR).

“In general, the weather across the state has not been ideal for vibrant fall color development,” said ODNR Fall Color Forester David Parrott. “The warm temperatures mixed with cloudy skies and rain have stunted and delayed fall color in some areas; however, some places are still on track to have a good display of yellows, oranges and reds in the coming weeks.” END_OF_DOCUMENT_TOKEN_TO_BE_REPLACED 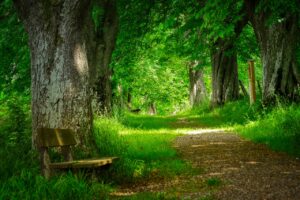 The Ohio Department of Natural Resources (ODNR) Division of Geological Survey is inviting Ohioans to celebrate Earth Science Week with a series of activities and webinars. The annual celebration will be held October 10–16.

One of those programs will take place in Highbanks Metro Park, Lewis Center.

“Earth Science Week is the perfect opportunity for people to discover the earth sciences and learn how they can do their part to protect our planet,” ODNR Director Mary Mertz said. “This year, we hope to help people learn to understand, conserve, and protect Earth’s most valuable resource, water.” END_OF_DOCUMENT_TOKEN_TO_BE_REPLACED 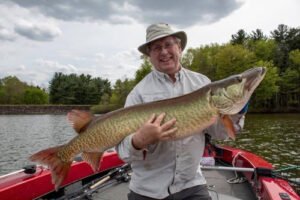 The muskellunge, or muskie, is a popular game fish that can grow to immense sizes in Ohio’s inland lakes, according to the Ohio Department of Natural Resources (ODNR) Division of Wildlife. Muskies are native to Ohio and top aquatic predators and the fisheries are maintained through fish hatchery efforts.

Nine Ohio reservoirs are stocked with muskie by the Division of Wildlife and one (Pymatuning Lake, on the Pennsylvania state line) is stocked by the Pennsylvania Fish and Boat Commission. Staff from Ohio’s London and Kincaid state fish hatcheries stock approximately 20,000 muskies measuring 8-12 inches every fall. “Historically, muskies were abundant in the bays and tributaries of Lake Erie and in many streams in the Ohio River drainage,” said Rich Zweifel, the Division of Wildlife’s Inland Fisheries Program Administrator. “Today, natural reproduction is rare because of habitat constraints in Ohio reservoirs. Stocking muskies in the fall contributes to higher survival because they can be stocked at larger sizes and in cooler water.” END_OF_DOCUMENT_TOKEN_TO_BE_REPLACED 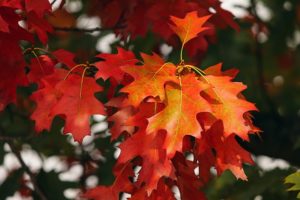 Entering the fall season, Ohio’s forests are beginning their transformation into a dazzling display of colors as the leaves change. Throughout the season, the Ohio Department of Natural Resources (ODNR), in partnership with Ohio. Find It Here., will be providing weekly updates on the best locations to enjoy unique activities and beautiful hues of autumn.

“The colors of fall make our great outdoors even more beautiful,” said Governor Mike DeWine. “This is the perfect time to enjoy a walk through a state park, nature preserve, or forest and experience the transition of summer to autumn.”

When forecasting fall color, foresters must consider several variables such as sunlight, temperature, wind, and rainfall when estimating the intensity and longevity of leaf color. This year, the ODNR Division of Forestry is expecting peak color to arrive in mid-to-late October. More information on the current forecast is available at fallcolor.ohiodnr.gov. END_OF_DOCUMENT_TOKEN_TO_BE_REPLACED 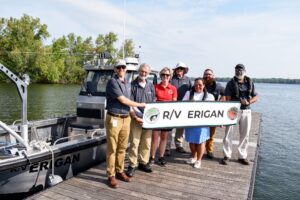 The Ohio Department of Natural Resources (ODNR) Division of Geological Survey has launched a new vessel to conduct important research on the geology of Lake Erie. Officially named Erigan before its maiden voyage at Alum Creek State Park on Tuesday, the boat is custom designed for research work and features a steel hull, making it robust enough for use on Ohio’s Great Lake.

Erigan is named after a prehistoric river theorized to have flowed between Ohio and Ontario, Canada. It will be used to help geologists better understand the sediments and rocks found on the lake bottom. Research includes analyzing the distribution of offshore sediments, measuring bathymetry (lake depth), and using side-scan sonar to identify patterns in sediments. The new boat also enables sub-bottom profiling studies that help geologists distinguish the loose top layer of sediment from the compacted materials beneath it. END_OF_DOCUMENT_TOKEN_TO_BE_REPLACED 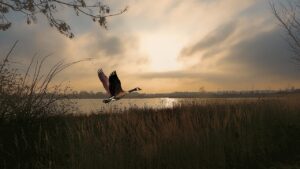 Ohio’s familiar habitat mosaic of farm fields, woodlots, and wetlands provides optimum opportunities to hunt mourning doves, squirrels, and waterfowl, as hunting seasons begin during the first week of September, according to the Ohio Department of Natural Resources (ODNR) Division of Wildlife.

Hunting is a favorite and cherished activity for thousands of Ohioans. As in years past, the hunting seasons that opened on Wednesday, September 1 include squirrel (fox, gray, and red), mourning dove, rail, snipe, and gallinule. Canada geese and teal (blue-winged, green-winged, and cinnamon) may be hunted during the early waterfowl season which began on Saturday, September 4.

“Ohio’s hunting license sales increased 5% in 2020 from the previous season,” said Division of Wildlife Chief Kendra Wecker. “We know that many Ohioans are eagerly anticipating the start of fall hunting. You’ll find abundant populations of mourning doves, squirrels, and geese when you return to the woods and fields. As always, thank you for supporting conservation in Ohio.” END_OF_DOCUMENT_TOKEN_TO_BE_REPLACED 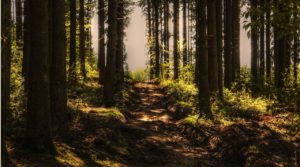 The Ohio Department of Natural Resources (ODNR) Division of Forestry invites the public to attend its annual open house to learn about management plans for Ohio’s state forests. This year’s open house is scheduled for Sept. 1 and will be held virtually.

“Ohio’s state forests are some of our greatest and most beautiful resources,” said Dan Balser, chief of the Division of Forestry. “We want to make sure the public knows that we are doing everything we can to preserve these lands and protect the wildlife that call them home.”

In addition to guidance on management activities, the Division of Forestry will also present a 10-year management plan for the 24 state forests in Ohio. Those forests cover more than 200,000 acres of the state. END_OF_DOCUMENT_TOKEN_TO_BE_REPLACED 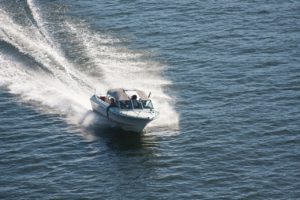 Alum Creek State Park has moved its park operations to the newly renovated park office at 3615 S. Old State Rd in Delaware, according to the Ohio Department of Natural Resources (ODNR).

The new office is open Monday through Friday 8 AM to 4:30 PM for watercraft registrations, boat inspections, and general park visitor information. Long-time park visitors will recognize the park’s new office location as the building that served as Alum Creek’s park headquarters until 2015.

“Returning our operations to the former park office building made sense because it allows us to provide better customer service for our park visitors,” said Jason Meyers, Alum Creek State Park Manager, “In addition to its natural setting and the pond nearby, the park office offers more space for visitors and staff.” END_OF_DOCUMENT_TOKEN_TO_BE_REPLACED 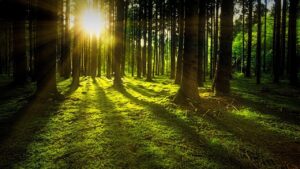 We continue our series “Everything You Always Wanted To Know About,” where we dive into weeds to bring you details on Delaware County ‘s geographical, cultural, and scenic landmarks.

The 115 acre Seymour Woods Nature Preserve in Liberty Township is known, among other things, for being an ideal place to get away from the hustle and bustle of everyday life.

The acreage was donated to the State of Ohio in 1972 by Columbus attorney James O. Seymour, and contains 1.8 miles of hiking trails. Deep ravines cut into shale cliffs in the park, and there are both heavily wooded ridge tops and open fields. As the topography changes, so does the type of tree — from oaks in the high ground to elms, maples, and willows lower down. END_OF_DOCUMENT_TOKEN_TO_BE_REPLACED

Everything You Always Wanted To Know About, Featured, Nature, Ohio Department of Natural Resources 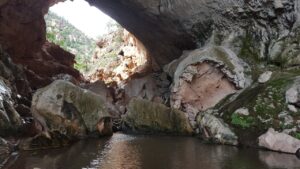 The Ohio Department of Natural Resources’ (ODNR) dedication to enhancing the visitor experience at state parks has earned national recognition. Ohio State Parks was named a 2021 National Gold Medal Award Finalist by The American Academy for Park and Recreation Administration (AAPRA) in partnership with the National Recreation and Park Association (NRPA). The Gold Medal honors park systems across the country that demonstrate excellence, innovation, and a strong sense of community.

“Being a finalist is a tremendous honor, and it’s no surprise to Ohioans who have been visiting Ohio State Parks in record numbers,” said ODNR Director Mary Mertz. “We’re grateful for the public’s longstanding support for our parks, and, regardless of the outcome, we will continue working hard to provide visitors with a world-class experience where priceless memories can be made in the great outdoors.” END_OF_DOCUMENT_TOKEN_TO_BE_REPLACED 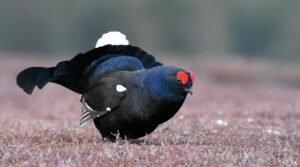 Citizen scientists can participate in surveying Ohio’s wild turkey and ruffed grouse populations by reporting sightings in July and August, according to the Ohio Department of Natural Resources (ODNR) Division of Wildlife.

Every summer, the Division of Wildlife conducts a turkey and grouse brood survey to estimate population growth. The brood survey relies on the public to report observations of all wild turkeys and ruffed grouse seen during July and August. Observations may be submitted at the Wildlife Reporting System webpage at wildohio.gov as well as the HuntFish OH mobile app.

To increase visitor safety, the gates to Alum Creek State Park’s beach area will be closed daily at 9 PM, according to the Ohio Department of Natural Resources (ODNR). The gate closure will also impact visitors using the large public parking lot and access to the park’s Storybook trail.

“Alum Creek State Park’s day-use facilities, such as the beach area, have been experiencing historic usage since last year,” said ODNR Division of Parks and Watercraft Chief Glen Cobb. “Closing the gates daily and establishing daily visitation hours will help protect the area from unlawful behavior, such as illegal dumping and vandalism.”

ODNR’s natural resource officers will increase patrols, as well as strictly enforcing all of Ohio’s litter laws. If park visitors are spotted littering by officers, they will be cited for improper disposal of waste. Litter violations can cost up to $500 per incident and 60 days in jail. END_OF_DOCUMENT_TOKEN_TO_BE_REPLACED