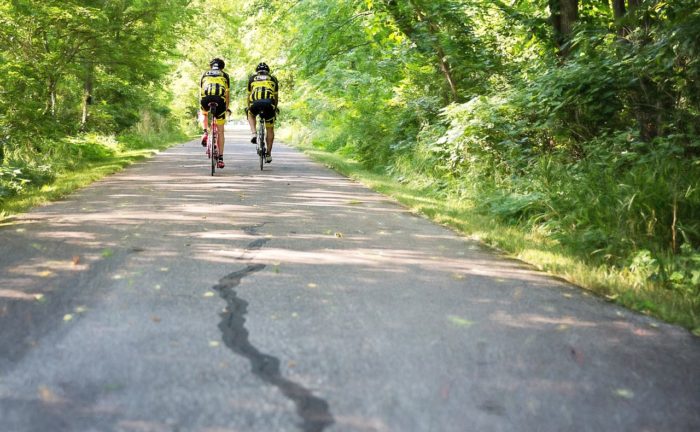 Rails-to-Trails Conservancy(RTC) recently unveiled its preferred route for the Great American Rail-Trail™—or the “Great American”—underscoring the organization’s commitment to creating an iconic piece of American infrastructure that connects more than 125 existing trails and 90 trail gaps over 3,700miles between Washington, D.C., and Washington State. That route goes right through Delaware County.

“Since the 1980s, RTC has understood the potential of a trail like the Great American Rail-Trail that could connect the nation. That vision has been a guidepost for the organization for 30 years. Now, we have the chance to create from that vision a national treasure that unites millions of people over thousands of miles of trail,” said Ryan Chao, president of RTC. “This trail is a once-in-a-lifetime opportunity to provide—together—an enduring gift to the nation that will bring joy for generations to come.”

The preferred route of the nation’s first cross-country multiuse trail is detailed in a comprehensive report released by RTC today. The Great American Rail-Trail Route Assessment Report outlines RTC’s recommendation for the route, developed in close partnership with states and local trail planners and managers.

In Ohio, the planned trail crosses the state from northeast to southwest. It follows the Ohio to Erie Trail as it travels through Sunbury and then passes through Galena as it heads to Westerville. Three of the remaining gaps are in the county:

“When defining the preferred route of the Great American Rail-Trail, we sought a cross-country route that would provide the highest-quality experience while delivering significant economic and social benefits to the communities it connects,” said Liz Thorstensen, vice president of trail development at RTC.“ This route achieves those things and more, in large part thanks to the input, support and leadership of state agencies and local partners who have built the existing trails that will make the Great American Rail-Trail possible, and whose ongoing collaboration is vital to its completion. The route assessment was developed over 12 months with input from RTC’s GIS analysis of more than 34,000 miles of multiuse trails review of state and local trail plans; and discussions with hundreds of local trail partners and state agencies representing the trails along the route.”

Traveling through 12 states and the District of Columbia, RTC and its partners have defined the Great American Rail-Trail as more than 3,700 miles, comprising more than 1,900 miles of existing trails—those trails already developed that will help carry the route across the country—and more than 1,700 miles of “trail gaps,” sections of trail in need of development to fully connect the Great American into one contiguous route.

As the nation’s first cross-country multiuse trail, the Great American will connect people of all ages and abilities with America’s diverse landscapes and communities. Nearly 50 million people living within 50 miles of the Great American Rail-Trail will be able to call this iconic American infrastructure their own as the trail delivers new access to the outdoors and new opportunities for physical activity and recreation. Hundreds of communities along the route will experience new opportunities for business development and tourism thanks to the Great American Rail-Trail, all while contributing to the growth of the country’s burgeoning outdoor economy—one of the largest sectors in the United States.

“We believe the Great American Rail-Trail will be a transformative project for the nation, as it magnifies on a grand scale the benefits that trails have delivered to communities for decades,” said Chao.