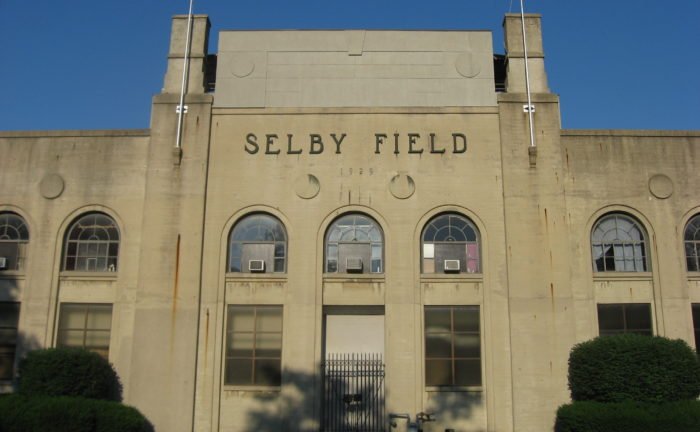 It’s one of the iconic early 20th football fields that have survived into the 21st century, still used for its original purpose.

Ohio Wesleyan University’s Selby Field is the home of the Battling Bishops football team, as well as field hockey, track & field, and lacrosse. With a seating capacity of 9,100, all seats fall between the 15 yard lines of the field, making it a remarkable place to watch a sports contest. It remains one of the country’s largest Division III stadiums.

When built, the stadium was designed to Olympic specifications (that’s thinking big, OWU!). The designer of Selby Field was George Gauthier, OWU’s hall of fame football and track & field coach, and it was said that the press box was the largest in Ohio outside of Columbus. The construction contractor was the Osburn Engineer Company, which also built the original Yankee Stadium in The Bronx. The location chosen was the “Old Burial Grounds,” Delaware’s first cemetery, which had severely deteriorated.

George Dyar Selby was born in 1846. Selby served in the Union Army during the Civil War; by occupation, he was a manufacturer and bank executive. Selby built a business that operated the largest shoe manufacturing facility in the country, which could make 100 pairs of shoes a day. As one Lancaster obituary shared after his sudden death in 1927 when his automobile skidded off a road, “Women of the nation walked a fortune right into the pockets of Mr. Selby who made millions in women’s shoes.”

The first game at Selby Field was on October 19, 1929 against Miami University.

Much has taken place within its walls since then. It was the site for 19 of the first 26 North Coast Athletic Conference outdoor track & field championships. It later became the home of the Ohio Machine of Major League Lacrosse from 2012 through 2015.

With its original, rounded arched windows echoing its Classical Revival architectural style, and its concrete walls decorated with plain medallions, this was a remarkable advance in collegiate stadium design.

Selby Field was added to the National Register of Historic Places in 1985.